I held onto my goggles, and once I was back at the surface I did a little breaststroke to get situated and then got to it!  I felt like I was swimming a decent pace, catching the water with each stroke, however when passing buoys I didn’t seem to fly by them, so it didn’t look like there was much current assistance.  Despite feeling like I was swimming strong, it quickly started to feel like it was taking forever.  I think I always forget that even though the swim is the shortest event of the three, it still happens.  I’m still in the water for 30+ minutes for a half or an hour + for the full (maybe some day I’ll get faster, lol), but I always think it will be over in a flash and it. Is. Not.

Almost the whole first half of the swim I felt like I was swimming off course and had to keep re-situating myself to head to the next buoy.  I’m not sure if the current was pulling me a little to shore, or what, but I kept finding myself swimming away from the buoys.  Also about half-way, I started to get a little bored and decided since my sighting was so crappy, and the water was pretty clear, I would try to hop on some feet.  I found a girl in a swimsuit and figured people in swimsuits were good swimmers since they were probably part of the relay, so I hopped on her feet.  My guess was correct, and we were moving along.  She was sighting well, so for the most part I could just focus on her feet (and pushing the pace to keep up) and not mess with sighting.  That worked fabulous until some big dude decided to swim in between us and I lost her.  Grr.  Then I found a guy with really long legs, but with a very passive, gentle kick and hopped on his feet.  I stuck with him until the 3rd to last buoy when someone else swam in between us.  Then I decided to just swim solo again, attempting to try to sight a little better, and finally I could see the last buoy.  Hooray!  I  kept swimming until I could the steps, and then a kind volunteer pulled me out and helped me up the steps (sea legs as usual).  I hit lap, started fumbling with my swim skin, and then wondered what my swim time was.  I flipped my watch time to see total time and was happy to see 1:07, realizing I had swam probably closer to 1:06, hooray! 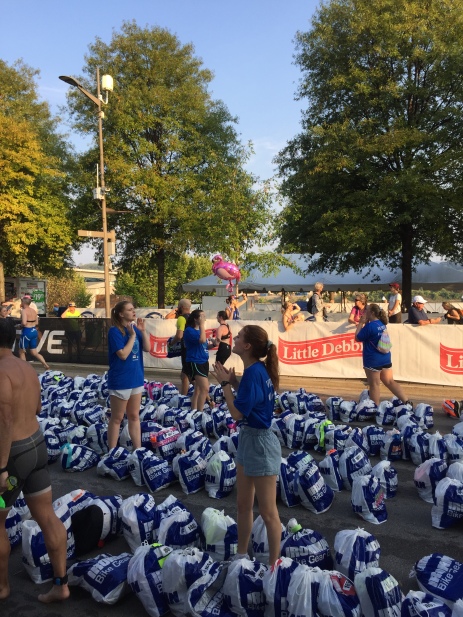 Impressed Jimmy caught a picture of me, I’m under the Flamingo Balloon!

I ran/hobbled and grabbed my T1 bag, ran into transition, dumped out my bag and got my gear on.  Tri top on, helmet on, dried my feet, socks, shoes, sunglasses, let’s roll!  I hobbled to my bike, grabbed it, headed to bike mount, hit my watch and was off!  A very uneventful T1 in 6:44.

As I got settled into a rhythm on the bike, I realized I never calibrated my power meter.  Whoops. I don’t always look at my watch to see my power during races, but I use it to make sure I’m pushing enough, or if I need to back off.  I kept on riding and noticed my average speed was really speedy for me (I don’t ride based on speed, but just like to know the avg number), but my watts showed I wasn’t doing anything crazy effort-wise.  Hmm…finally by mile 10 I decided I needed to make sure the power numbers I was seeing were accurate, so I pulled over, and took a couple of minutes to calibrate my power.  Back on the bike and after a few miles, my speed was still crazy fast 18+mph (for me) and my power was within my planned range, oh well, I was going to go with it then.  The first loop went fabulously, I felt great, it wasn’t so hot, in fact at the beginning I was a little chilly.  Special needs around mile 53 was the fastest special needs stop for me, I was in, grabbed my bottle wrapped in foil (it was still cold, hooray!) and was out.  I had to pee but didn’t want to stop and was hoping I might still be able to go while riding.  However after not much luck, I saw the porta-potties were unoccupied during the next aid station and decided to just stop and go since I would probably waste a lot of time and energy on the bike while attempting to go.  I was in and out pretty quick, just a couple of minutes, and then got on the bike to turn for loop 2.

I was feeling good and saw I was just around 3 hours for the first half, which I was thrilled about!  On I went until about mile 70 when I started to really feel the heat.  Soon I started to feel nauseous and began to worry that I had ridden the first loop too hard (which in hindsight looking at data, I hadn’t, it was cooler and there was a slight tailwind).  I tried to up my water intake as I had only been drinking about half of a bottle every 15ish miles (between aid stations), but it was hard because my water was warm and most of the bottles I took at aid stations were also warm.  Blech.

As I was going up a hill and realizing I was really starting to feel bad, an older guy was passing me and said ‘make sure to keep drinking you water’, and then said ‘you are looking pretty pale’ and rode up past me. Oh boy, thanks for the vote of confidence.  I was feeling crappy, maybe even a little shaky/lightheaded, and now someone is telling me I look pale?  Then I really started to freak out thinking maybe I was in worse shape than I realized.  Once I crested the hill, I switched my watch to show heart race and focused on bringing it down rather than looking at power numbers.  I kept drinking my warm water, took a swig of my warm Infinit (it stayed cool for like 10 miles after I got it from special needs, boo), and then took some Base salt.  I kept pedaling, much slower, but still after several miles I just wasn’t feeling better.

I made it to the next aid station and pulled through where the water stop was to dump water over my head to try to keep cool.  The water there was cold and felt great! I refilled my bottled, chugged the rest and then just kept pedaling.  I upped my speed a little now that I was feeling a little better from the cold water, still nauseous, but not as in terrible of shape.  I knew I was going to finish but it was going to still be a miserable 30 more miles.  But less than two hours, I can do less than two hours!  From then on I just kept checking my watch and taking in my nutrition every 15 minutes with water, and Base salt every 30, which kept me semi distracted and helped pass the time.

Soon I was headed back into downtown, oh man, boy was I thrilled.  I was also in slight shock that I made it this far, I had never felt so crummy on the bike before and really wasn’t sure if I’d make it back to transition.  With my joy of nearly being done, I passed a few people in the last five miles and wanted to kiss the ground when I got to bike dismount, however instead, I saw JMR and waved, and then told the bike catcher that ‘this bike is alllll yours’ as I wanted nothing to do with it anymore.  Then I took off my shoes, hobbled through transition and got my bag and headed into the change tent.

Mid-dismount to get OFF my bike!

Once in the change tent I dumped my gear out of my T2 bag: changed socks, put on my running shoes, threw on my hat, put on my race belt, grabbed my baggie filled with gels and my cooling towel and was off!  (and of course helmet and bike shoes back in the bag)

T2: 5:26 (with a quick dash in a porta-potty before officially heading out)