I was determined to hammer out this race report while everything was still fresh, and it’s still took me over three weeks!  So here we go!  JMR and I left Saint Louis around 8:30a, since Chattanooga is 6.5 hours away and I wasn’t doing the ‘leaving in the afternoon to avoid taking a whole day off of work and arriving super late’ as we’ve done in the past.  We got to Madison, WI around midnight and that was pretty awful.  So we left early on Thursday, stopped for lunch around noon and arrived at 4:30p.  Other than some heavy rainstorms, it was an uneventful drive.  I’ve said this before, but I have to say it again,  I LOVE being able to put my bike IN my car rather than on a hitch mount, it just keeps it safe and sound and when we stop for gas, etc, I’m not worrying about something happening to it. I just love my little crossover SUV I got about a year ago (IMLOU was it’s maiden voyage)

Once we arrived at the hotel we unloaded all of our stuff (which took several trips), hung out in the room for a bit, and then walked around the riverfront to check out the river and race site.  After walking around in the heat for a while (it was HOT) we headed to Mellow Mushroom for dinner.  We have one in Saint Louis, but have never gone, and for some reason pizza sounded good.  After dinner we headed back to the hotel where I did my PT exercises and some foam rolling.  I’m not sure what I did at yoga on Wednesday but I had pulled something in my right hip/glute that was bothering me, so I was hoping rolling it out would help.

Friday I got up around 8a, went downstairs for some breakfast, and then headed to athlete check-in at 9.  After an uneventful check-in, (and got a nice backpack as swag) I perused the various booths in Ironman Village and scored a ton of unhealthy treats from the Little Debbie tent.  Moonpies, mini muffins and pumpkin shaped flavored cookies.  JMR was going to be thrilled.  I headed back to the hotel to drop off my stuff and picked up JMR as he was going to go for a run while I attended the athlete briefing at 11a.

On our way to IM village, JMR kept commenting on the heat… gee thanks, yes, I know it’s hot. 🙂  While he sweated it out running along the river and the nearby hilly area, I sat at the athlete briefing where it was confirmed that unless a huge cold front came through, the swim wouldn’t be wetsuit legal if you were wanting to compete for awards.  To me that was a relief, because swimming in a wetsuit, even sleeveless in these temps seemed like an easy way to overheat and start the bike already dehydrated, so I was glad the decision was made for me.  I also learned that they were going to have ‘cooling buses’ along the run course for runners.  I didn’t give that much thought, but apparently it was causing some controversy among other athletes as some felt that it was cheating.  I guess I could see the cheating aspect (like stopping inside a restaurant during the race to take a break), but honestly if you were in bad enough shape that you felt that you needed to get on a bus and take the extra time to cool off, I doubt that person is gunning for a Kona or Age Group slot.  So, let people race their own race and worry about yourself. 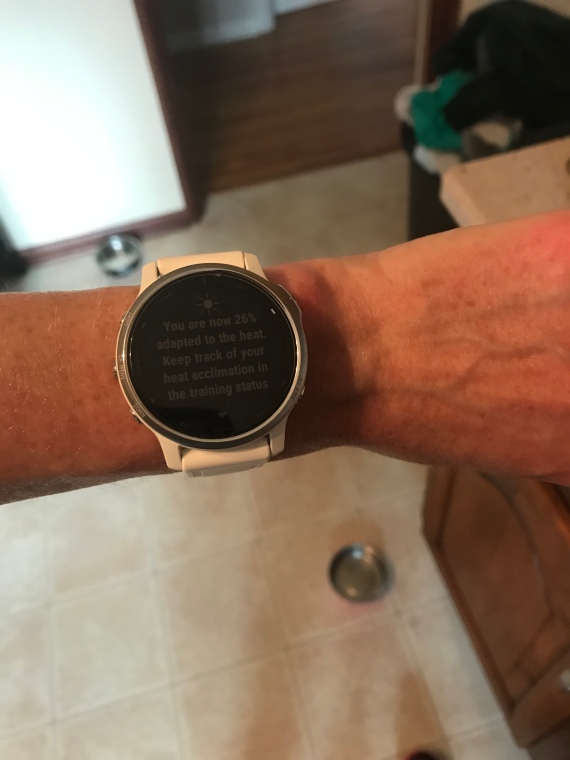 Here’s some humor regarding the heat, my watch apparently can tell heat acclimation and it decided to let me know during race week that I was not at all acclimated.  26%!  Although it was new and I had only been wearing it for a week, so it didn’t have much data to work with… but.. I don’t think it was too far off.

After the athlete briefing, I wandered around IM Village and then headed back to the hotel to wait for JMR to finish his run so we could get lunch and go to the Aquarium.  I was determined to do ‘fun’ stuff on this trip so JMR didn’t feel like his whole trip was eating and hanging out in the hotel room, as most IM weekends go.  Once he got back we got lunch and headed towards the Aquarium, where we found out the prices of tickets… $35!  That was a tad more than we were wanting to spend as it was just ‘something to do’, so instead we walked along the riverfront and then across the pedestrian bridge to GA.  Downtown Chattanooga and the surrounding area is so nice, so it was fun to just walk around.  We also grabbed a few things from Walgreens which made our little hike over to GA worth it, lol.  After walking a little more than I should have, we camped out in the hotel room for a bit and then we drove to dinner at for burgers at The Terminal Brewhouse, and they were really good!

Saturday morning I was up around 8a, got breakfast, and then while JMR headed out for another run, I decided to do a little dress rehearsal.  So… the thing I was stressing about most the week before the race along with whatever muscle I pulled in my hip/glute was WHAT THE HECK TO WEAR ON TOP.  I really felt that I was going to need full sleeved coverage to help keep the sun off and keep me wet/cool, and the two current tops I race in are both sleeveless and black which seemed like not smart options.  I had been looking for a sleeved top to race in this season, but didn’t have any luck in finding any that I liked and I also still wanted to race in an Endurance Company kit.  Additionally, because of my history of having to hop into porta-potties during races, a one piece sleeved-suit frightened me, so I knew I wanted to stick with a two piece (I kept finding so many more options of sleeved kits, but they were all one-pieces).

However, the Friday before race week (so 10 days before the race) I was perusing the Kiwami site (I have a Kiwami tri top and a Kiwami bike aero top that I both love), and I saw they came out with a new version of the bike aero top I have, which was a little looser, longer and meant to be run in.  I knew it was meant to be!  With expedited shipping it could arrive in a few days, just in time before we left for Chattanooga.  I was bummed I wouldn’t be able to race with the Endurance Company logo, but really in the grand scheme of things, that wasn’t a big deal.  I still wanted to make sure that they could add the logo after it had been raced in, so I emailed Kiwami and to my surprise, they said they could work on it that afternoon and ship it out that day or Saturday.  Woah!! Hooray!! Talk about awesome customer service!  It arrived Monday afternoon and looked beautiful.  That Tuesday morning I took it for a test run during my track workout.  The sleeves felt great, however the bottom part, despite having a huge elastic waistband to prevent from riding up, still rode up and bunched around my waist (this is not a new problem, I have no waist so basically all tri tops unless hemmed do this…grr)…which could be very annoying for 26.2 miles of pulling it down.  But would the sun protection and cooling factor of the sleeves/fabric outweigh the annoying waistband factor?  Decisions, decisions. So I still packed one of my racerback tri tops as well just in case. It was going to be a game day decision, lol.

Ok, so with that really long backstory (taper makes me super crazy and overthink things obviously), back in the hotel room I was in my tri shorts and new top, running around with all of my stuff in my shorts pockets and tri top pocket to really see how things would feel as I didn’t have everything stuffed in when running on the track.  Even with the top scrunching up a bit, it still felt ok once I had all of my stuff stuffed in it (cooling towel, zip-lock baggie with a gel, ibuprofen, Imodium and tums) which kept it from riding up too much.  Well hooray!  The decision was made. 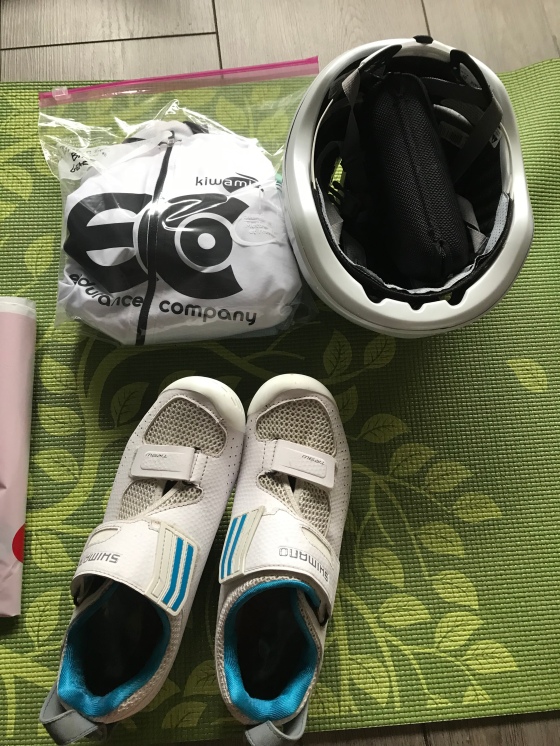 T1 Bag Contents.  Socks are hiding behind my top in the clear bag. Keeping it simple!

JMR came back to the room just as I had put everything away, so he was spared of the tri top drama. We then headed to grab lunch at Community Pie where I got the chicken caprese sandwich, and Jimmy continued his spectating carb load and got pizza 🙂  After lunch I got my gear bags ready to go, and then we headed back to Ironman Village to rack my bike and drop off my gear bags, then we turned around and headed back to the hotel.  After relaxing in the room for a couple of hours, we walked to dinner at Public House, which was also just as delicious as the last time I went. I had the halibut and rice for dinner, some Twizzlers in the hotel room as ‘dessert’ and then attempted to fall asleep around 8:30p.

I tossed and turned a few times, but still got pretty good sleep.  When my alarm went off at 3:30 I was up and awake, a pleasant surprise since I was dragging butt when I got up that early for Chattanooga 70.3.  I guess having a few more days to get used to the hour time change helped.  I ate my pre-race banana with almond butter and 1/2 of a Bobo’s oat bar, along with a cup of coffee and started to get ready.  At 5a we headed down to transition so I could pump up my tires, add my nutrition to my bike and my run bag.  Since we still had about 30 minutes before we needed to start loading the bus to head to transition, we headed back to the hotel.  It nice being able to use our hotel bathroom one more time and stay away from the crowds for a bit.  Around 6:20a we headed back to transition, had a short wait for the buses and arrived at the swim start at 6:40.  One more trip to the porta-potties and then finally we headed to swim 1:10-1:20 group.  I was nervous but not super nervous, and was also pretty darn thrilled to actually have a FULL swim!!  I wasn’t sure how the rest of the day would go, especially with the heat, but just knowing I had the opportunity to do the full race made me very happy. 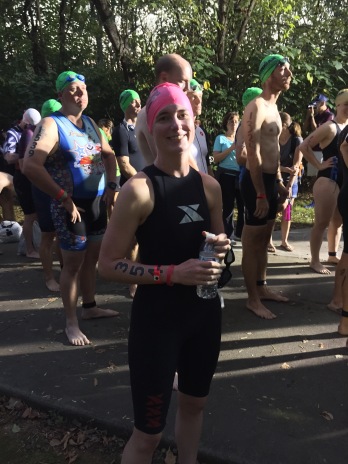 Soon we were walking towards the start (I love the self seeded starts, they are so much calmer), I gave JMR a kiss good bye, and then walked down the ramp to the water.  1-2-3, I was in!  Here we go!!

The Swim and Bike