Hello and Happy Thursday!  It’s been a while since I’ve updated the blog as I’ve been struggling with what content I want to update it with. I thought about doing weekly training updates again for Ironman Chattanooga, but meh, I’m just not feeling it these days.  So I think this year I’m just going to stick with posting race recaps and some other noteable events as the season progresses.

So to catch you up, this winter I did the Frostbite short series again and had some good races compared to last years times, which was pretty encouraging that I hadn’t taken the off-season too easy 🙂  I also had a HUGE PR at the St. Patrick’s 5 mile run in March, with a time of 35:33, a PR by 2 minutes (!), which was really suprised me.  In fact, I guess I went in with not many expectations except to at least match my time from last year! 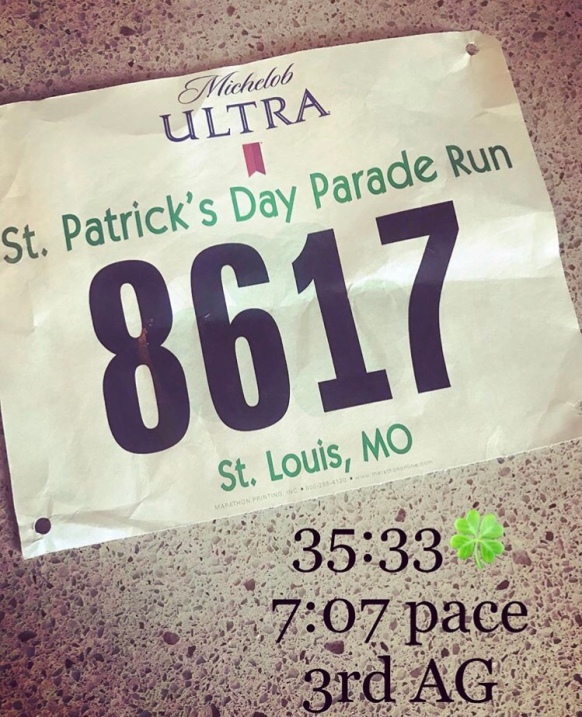 That got my head spinning with the Go! Half as my next race and wondering what I was capable of, maybe more than just a tiny PR from the Go! Half last year.  So race day I went in with a pretty lofty goal, not knowing that the course was *much* hillier than last year and also not really factoring in that the starting temperature was 30 degrees warmer than last year….well you can probably guess how it went.  Not well.

I would do a race recap, but I have this wonderful ability to block out pain and discomfort after the fact, and since more than half of the race I was in some serious quad pain, I don’t remember much of it.  Except that I clearly remember how sad I was as each mile got slower and slower after mile 7.  I could see the train wreck in slow motion, but my legs just didn’t care and kept feeling worse and worse.  Here are my splits which might narrate it better.  I would display an elevation chart to show how hilly it was, but that feature was broken on my Garmin (I just got a replacement yesterday!! yay!!) 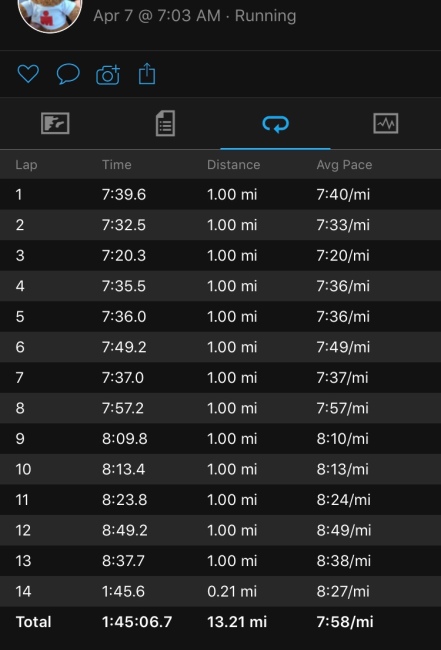 I mean, it is still was my second fastest Half-Marathon, but I was really hoping to do much better.  HOWEVER.  Holy legs.  My legs were sore for six days.  Finally by Saturday they were coming around.  I don’t think my legs have even been that sore post IM.  Those hills tore them up and perhaps I went out too hard.  Now looking at the splits, 5 of the miles were faster than then planned 7:40 pace, and those were early in so…. even with the hills and warmer temps, I didn’t set myself up for a great second half of the race.  I am going with a better pacing strategy for Illinois, I might even go 5 or so seconds slower the first few miles just to settle in and then hold the planned pace and see if I have anything extra at the end to make up the slower first few miles.  I do have two things on my side that I didn’t have at Go!… a FLAT course and cooler temps, in the 40’s, which may include rain and a little wind, but that’s still better than 60+ degrees and hillllls (I don’t actually mind hills, but since I’m gunning for a certain time, hills ain’t gonna help with that!)!  My strategy might work, or it might not be my day, but I am excited to race again and then cheer JMR on while he does the marathon. He has trained his ass off for this training cycle so I really hope he has a great day and his hard work shows with a PR.

And then…. three weeks after the Illinois Half-Marathon I have Chattanooga 70.3!  So I am going to do a much better job on recovery after this half so my legs can get back to business as soon as possible after the race.  I will not have a repeat of SIX DAYS of sore quards. I’m bringing a recovery drink to put in my checked gear bag, forcing myself to roll right after we get home and taking hot baths with Epsom salt each night until legs are feeling good.  Oh and yoga, lotsa yoga.

I’m actually kind of nervous about Chattanooga because I’m going to the race solo since JMR is racing a half-marathon in Quincy, IL that weekend.  I’ve traveled to other 70.3’s solo, but not six hours away and not races this big.   But I am also excited to just get out and race and get a preview of what I will be racing come September when I do IM Chattanooga.  I’m sure I will have more thoughts on how I’m feeling and expectations when I get closer to the race, but for now, I’m in Half-Marathon race mode!  🙂