I wish I had written this as soon as I got home, since now a couple of weeks have gone by and it isn’t as fresh in my mind, but I still remember most of the important race details 🙂

Friday afternoon JMR and I drove the 3 hours to Champaign, IL, went straight to packet pickup and then checked into our hotel around 4p.  His parents had made the trip to watch us race and it also was his dad’s birthday, so we meet up to take them out to dinner to celebrate at Biaggi’s that evening.  The food was pretty good, but the sizes were huge, however I don’t think JMR was complaining as he is a big fan of carb loading with a lot of pasta pre-race!  We also chatted at dinner about a few places his parents could easily get to on the course to see him, so this was going to be much more fun for them to see him race than in Chicago which was just so big that they only were able to see JMR and I at the finish.  The weather was looking to be good, high 40’s/50’s and overcast.  I was ready to race!  We were in bed early around 9p, and after some typical tossing and turning, we were up at 5a ready to go.

We got to the start line around 6a, plenty of time to hit up the porta potty’s multiple times, and I also met up with the Endurance Company for a pre-race photo, as there were about 8 of us racing.  As 7a approached, JMR and headed towards the start and while getting into our corral we saw his parents and chatted with them for a bit.  And then, we were off!  I approached this race a bit differently than the Go! Half and decided to go out more conservatively the first few miles, at closer to a 7:45 pace and then after getting settled in, I would bring it down to 7:40’s…. and then if I have more in the tank, speed it up at the end (negative splits always sound good pre-race, lol).  That way I would still PR, just not maybe as big of one if I went for 7:40’s the whole race.  I was ok with playing it safe rather than having a blow up again like Go!. So, I stuck with that plan, the first four mile splits were 7:42, 7:43, 7:37 and 7:44 and then decided I needed to start pushing the pace, miles 5 and 6 were both 7:38 and then I kind of freaked out, my legs felt heavy, I was worried if I pushed anymore I would crash and burn by mile ten. 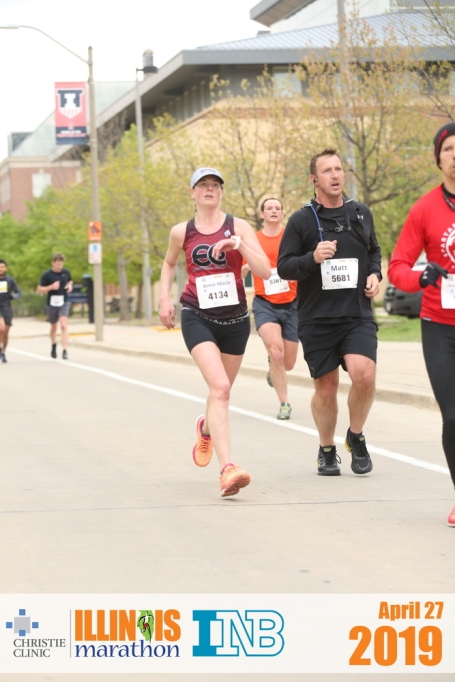 Still early on, feeling in control of my 7:45ish mile splits. 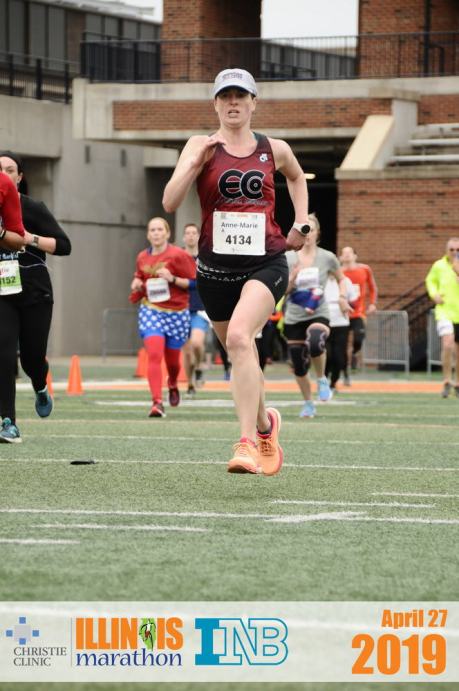 Clearly, I had more in the bank, I was just too scared to try to tap into it and instead let my head take over during the back half of the race.  BUT I did PR, I mean that was the goal, so I was happy about that, but miles 10 and 11 still sting a little when I go back and see the splits.  So many if’s, but with Go! so fresh in my mind, I just wouldn’t – couldn’t- let myself cross another finish line in that bad of a shape.  I also knew I had Chattanooga 70.3 three weeks later and there was no way in hell I was going to give up another six days being stupid sore.  So… I raced what I felt was smart and worth the risk at the time.  I’m making peace with that and moving on 🙂  There will be other races to try to chase running sub 7:40’s and some day break 1:40, which was the original goal at Go! 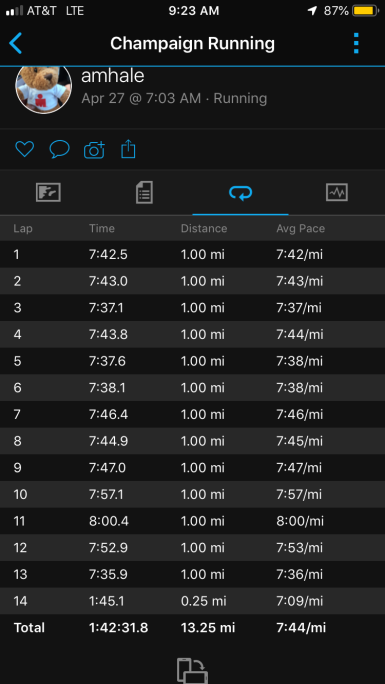 Really lost it on mile 10 and 11, at least 13 had redemption!  Overall splits look better though than Go! as far as being consistent and not blowing up.

Ok.. now on to JMR’s race, holy sh*t.  When I finally got my phone from gear check, I could see he was having a great race, and at mile 20 he was on track to run a 3:13:xx.  WOAH.  His PR was 3:24:38 at St. Jude in December 2017.  He was on track to go sub 3:20 at that race, but either due to a last-minute change or poor communication, he wasn’t planning on drinking Nuun on the course, and was expecting a drink that had more calories in it, so by mile 18 he was feeling it and then proceeded to crash and burn until the end.  This time Illinois stuck with what they posted they were serving on the course: Gatorade Endurance, the weather was cooler, the course was flatter, so JMR had more going his way this race.  Shortly after getting my gear bag and checking JMR’s status, I found JMR’s parents in the bleachers (you finish in the stadium and the spectators can watch from the bleachers), and we both tracked him as the miles ticked by.  He was having a GREAT race.  I was getting goosebumps as he hit mile 24, closer now on track for a 3:15 but still keeping a good pace.  Holy cow!  Then after what felt like ten years, we saw him run through the stadium, crossing the finish line at 3:15:56… and we were all screaming!!  I couldn’t believe it.  An 8 minute PR!!  I was soo happy that his training had paid off and he had a great race, he was so bummed after Memphis I just didn’t want him to walk away defeated again, when he had worked so hard.

We all gave him hugs as he recapped his race, and I think he looked a little pleasantly surprised with his time too.  He knew he could run those paces, but for everything to come together on race day sometimes almost feels like magic.

After the race we headed back home (I drove!) and celebrated with pizza on the couch.  Then the next day it was back to business as usual for me, with an easy recovery ride and MY LEGS FELT GREAT!   I was ready to rock the last week of big training before Chattanooga 70.3 and also bask in my mini PR.  Also, side note: so…. I really think my 2018 Go! Half 1:43:57 was a fake PR.  My Garmin shows I crossed the finish line at exactly 13.1…. whereas this year I crossed the line at 13.25 (different course, but it made me question how great I really was at tangents), and then at Illinois I also crossed the finish line with 13.25 on my Garmin.  So… I think the Go! 2018 Course was a little short (there was one part where we ran over a median and there were cones, so I think everyone cut the course by accident) and I am happy to report that I now have a new LEGIT PR 🙂