A quick recap of the past two training weeks and I’ll save my Go! Half Marathon race recap for its own little post 🙂

Wednesday – 2150y swim in the am, trainer ride after work with a little 10 min run after.

Friday – Since we get Good Friday off at work, this was an extra easy day 🙂  I woke up and got in a 2675y swim (with 30 minutes timed which is why the weird distance), after a small breakfast and a little relaxing I went and did hot yoga a little later that morning.  Then I ran several errands, also dropped off Easter baskets for my three nieces (I was a ‘fun’ aunt this year and gave them quite a bit of candy).  Then I watched ‘I, Tonya’, which I really liked (I went into it not really sure what to expect) and when JMR got home from work we went out to dinner.

Saturday – 8 mile run in the am with 6 @ race pace.  Eek…. As I’ve gained some speed since January that number is kind of a question mark for me.  I have a general idea, but I think (hope?) the original 8:30 pace might be a bit slower than what I can do.  However, I also don’t want to blow up mid-race so I don’t want to be too risky with my pace either.  8:20 was the race pace I settled for during the run and it felt good and manageable, however it was only 6 miles… I’ll have 7.1 more to do during the race, so it might feel quite a bit different during the later miles.  Regardless I have put in the work, not just getting in the ‘long’ runs, but the work every single day (only one missed workout since 1/1 due to being sick and it was a ride), so hopefully if the race doesn’t turn out how I hope, it also won’t go too far south either!  I have a super secret goal (goal: 8:30 pace, secret goal: Faster than 8:30, super secret goal: ?) which I’ll share on Sunday because I don’t want to jinx myself!

After the run, I showered and packed and we headed to Quincy for Easter.

Sunday: After having brunch with JMR’s family, we headed back home around 3p, which was later than we should have since Quincy had already started getting snow around noon.  I really didn’t think it would do much since it had been fairly warm over the past few days, however the snow still stuck to the ground and by the time we left, they had already accumulated at least an inch of snow. 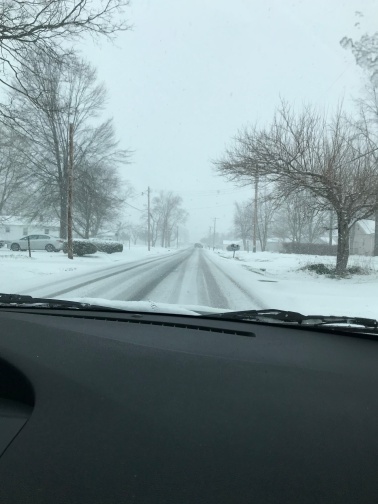 Which made for a very SLOW drive home.  In fact one hour into the two-hour drive home, the car in front of us did a 360 on the highway after somehow fishtailing (I still can’t figure out what exactly happened).  It was pretty darn scary.  When we finally got home (and picked up Patrick along the way at my parents), I hopped on the trainer at 6 for a 2.5 hour ride, followed by a 20 minute run.  It was rough.  I just hate doing workouts that long that late in the day, but I didn’t have a choice.  I finished up right around 9, after a late dinner (protein shake and Kind bar) and headed to bed.

Saturday – 30 minute shakeout run followed by yoga.  I decided to take the free yoga class at my gym (doing hot yoga 2x a week is pretty expensive!) called ‘yoga for everybody’, and they weren’t kidding!  I wouldn’t really call it a yoga class as it was more of a stretching in the dark on a yoga mat class. However, it was relaxing and just what I needed the day before a race.

Sunday: Go! Half Marathon!  I had good feelings about the race all week since I hadn’t missed one run training session (in fact so far this year I’ve only missed one training session and it was a ride due to a sore throat/body aches), and my paces have been improving, so I felt that even if I didn’t have a great race, it would still be better that my past few half-marathons (spoiler-it was!).

After the race I celebrated with way too many carbs at brunch, lounged on the couch, a epsom salt bath that night and an early bedtime!

I’m headed to Fort Smith, AR tomorrow for work and won’t be back until late Friday night, so I won’t be getting in too many workouts, good thing it’s a ‘down’ week!