So, after Steelhead I took an entire week off from training… and then I got sick and other than an easy 3 mile run, I ended up taking that whole next week off too. Finally last week I got in a few more workouts that could maybe be considered an actual training week, although I didn’t feel 100% until Wednesday so Monday and Tuesday were rest days.  Even with getting in most of the workouts last week, I feel like a sluggish blob as I didn’t really cut back on my eating after Steelhead (and also indulged quite a bit) so I have managed to pack on a few pounds.  Now that I have a little more momentum to get into an off-season training routine, I’m getting back on the wagon with healthy eating in hopes that by October I will have gotten rid of those pesky pounds and maybe even a few more since I was definitely not at my usual race weight at Steelhead (JMR said watching me attempt to put on my swim skin was a pretty funny sight). Although just because it’s the off season doesn’t mean there won’t be any races!  I plan to focus on shorter running races this fall/winter and even have a couple of trail races planned, which I have never done before so that should be interesting. Ok onto to last week’s training:

Friday – Easy swim (which I ended up oversleeping and did on Monday, 9/5)

Saturday  – Easy swim, followed by a 2 hour ride.  This ride ended up being pretty eventful, for the first time I saw a snake come slithering out of the grass onto the trail right in front of me. I screamed and managed to not ride over it or lose control of my bike, but I’m pretty sure if I had run over it I would have lost control.  Snakes are probably of one my top phobias.  Then a bee decided to hang onto my forearm and not let go, so when I finally swatted at it, it stung me. I haven’t been stung by a bee since I was like 10… and it hurt!  In fact there’s still a welt there today and it’s itchy.  Grr.

Sunday – 5 mile run with 3 @ race-pace, however those three miles weren’t really close to race pace because I feel pretty out of shape for not having run more than once in 3 weeks (also see weight gain discussed above :).

Sunday afternoon JMR and I went to watch the Gateway cup, a four day cycling event/race that is staged in different parts of Saint Louis each day.  The weather was really nice and it wasn’t as hot as it usually is so we ended up staying for almost six hours to watch the various races, they even had a kid’s race which was really cute to watch. Also  I have no idea how the cyclists can ride so darn close together when racing, there’s no way in heck I would ever attempt to try a criterium race!

Monday we slept in late, then I headed to the pool to I make up the missed swim on Friday, went grocery shopping, did laundry and also managed to buy a new fall wreath for our front door.  Our current one with white/purple flowers was just not cutting it with fall around the corner.  I also bought fake pumpkins to put in our little bicycle plant holder at our front door since the flowers in there now are pretty much dead, however JMR pointed out that it was a little bit early for pumpkins, so I will have to wait until October to put those out (I have trouble using restraint when it comes to Fall/Halloween decor since it’s my favorite holiday). 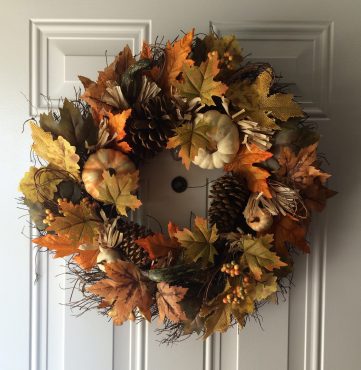 Even our fancy candy jar is ready for Fall.  Note that I filled it up a little over a week ago and the candy corns are all gone.  JMR has a ridiculous sweet tooth!  I keep telling him that candy is for guests!

So it was a semi-busy, fun and generally relaxing holiday weekend!  Now back to the grind (but hooray for a short work week!).