I’m sad the holiday weekend is already over and now it’s back to the workweek grind.  I’m also sad it rained most of the weekend and JMR and I didn’t get to do much other than watch a lot of movies.  We did run a 10k on the 4th, so that was fun 🙂

Monday – 60 minutes of Yoga – Before work I took a hot yoga class at a studio near my house and it was a good way to start the week!

Thursday – 45 minutes of stretching, core and weights in the am, and a quick 3 mile run after work.

Saturday – 3hr trainer ride (boo rain!), my bike shorts were so soaking wet by the end, that water was dripping into my bike shoes.  Gross!  After the ride I hopped off my bike and ran 15 minutes in the rain.

Sunday –  I didnt’ get up early enough and by the time I was heading out the door it was rainy and thundering.  After debating going to the gym (ugh…I really didn’t want to run 8 on the treadmill), I decided I’d run the 10k that JMR was doing  Monday morning and just add a little bit more speed to the 6 miles that were to be at race pace.  I did feel guilt/lazy not doing any workouts that day, since usually I do something on Sunday’s.

Monday –  (Since it was a long weekend, I’m including these hours in this past training week.) 10k race!  It has been a long time since I’ve raced a 10k and I was kind of excited but also a little nervous since my mileage hasn’t been too high over the past six weeks (it sort of dropped off after the Quincy Half and now we’re slowly building it back up), so I wasn’t sure how the race would go.  After accidentally taking the long route there, we finally parked at 6:50a, and the race started at 7a, giving us not much time to get to the start.  Oh boy, we ran the .65 miles to the start and got there with a few minutes to spare (which I ran into the bathrooms for a last minute pit stop, thank goodness it wasn’t crowded).  I lined up at the start at 6:59, talk about cutting it close!  I ate a gel and off we went.

I knew I wasn’t going to PR based on my current speedwork/paces, however I was hoping to come in under 50 minutes, which would be miles in the low 8’s.  The first two miles were around that pace but then the next two were more like 8:15’s and it was starting to feel tough.  Ugh.  And I still had two miles to go.  I had passed JMR on his way back from an out and back part of the course around mile 3 and was surprised to see him around mile 4.5 on the side of the road.  He started up again running with me, and I asked him what was wrong.  He said the humidity and heat had gotten to him and he was feeling sick.  Ugh.  Poor JMR, his first DNF.  Once we got closer to the finish line he said he woud meet me on the other side of the finish area (he didn’t want to cross the finish line and heaven forbid have a record of running such a slow time, lol).  I checked my watch and saw that I probably wasn’t going to make it in under 50 minutes…in fact, it was looking like it would be 51:xx.  Ugh, I pushed the pace as hard as I could for the last .3 miles and finished in 50:58.  I need to stop looking down at my watch when I cross the finish line…it makes for very unflattering double chin photos. 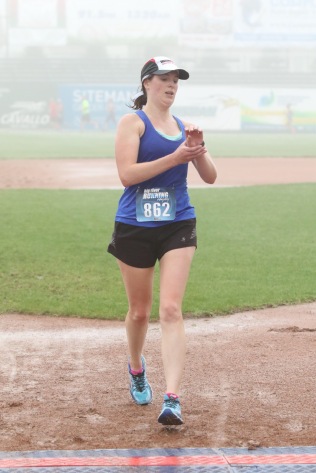 That’s about it!  Happy Wednesday!