Week 13, the weekend especially, was very busy!  We had our ‘Epic Race Weekend’ this past weekend – I gave it that name because JMR was running a marathon that Saturday in South Bend, IN and I was racing a half-ironman on Sunday in Effingham, IL,  so it was busy but fun!

Tuesday – 1hr run with 10 min tempo inserted.  Ran 10 minute tempo @ 8min pace, but cut the run short to 45 minutes since I woke up with a sore throat and didn’t want to push it too much (why do I always get sick the week of races?).

Wednesday – 1:30 ride.  The plan was to ride at a nearby park I used to ride at a couple of years ago when training for IMAZ.  The ride started off slow because the first part of the path is alwasy busy with runners and dogs, but that day it was crazy PACKED.  I couldn’t even get up to 12 mph and was weaving in and out around people (and geese!), it felt dangerous and I regretted choosing this location.  When I finally got to the mostly cyclists portion of the path, I just felt cranky and slow.  I could hardly push 15mph and I just was not in the mood to be riding.  I kept trying to push the pace and just tell myself to ‘suck it up’, but after an hour I was still tired, my throat was scratchy, and I called it quits and headed back to my car.  No run after.  Fail.  I just wanted to go home, shower and eat.

Thursday – After taking airborne when I got home from my ride yesterday and drinking it throughout the night, I woke up feeling much better.  My coach gave me the green light to skip a workout or two this week if I felt tired, so I decided to skip my swim that morning and slept in until 7:30 and I think the extra sleep was needed.

Friday –  Pre-race brick!  I took the day off of work since we were leaving at 11:30 to head to South Bend for JMR’s marathon on Saturday, so I woke up and headed down to the basement to ride the trainer.  45 min ride followed by 1 mile run, and I was done!  Shortly after we were off to South Bend to the Sunburst Marathon.

Saturday – South Bend is a lot father than I realized.  I thought maybe it was 5.5 hours…wrong…very wrong…especially when you go through Chicago during rush hour (whoops, won’t take that route again).  6.5 hours later we were finally checking into our hotel.  After quickly checking in, we headed to the expo near Notre Dame’s campus to pick up JMR’s packet and then headed to dinner at a nearby Italian restaurant.  After dinner we stopped by a gas station to get more Gatorade for JMR and then we headed back to the hotel to wind down and go to bed.

After a restless night of sleep (people in rooms nearby were sooo noisy, and a car alarm went off at 12:30am. fun.), we were up at 4:30a since the race started at 6am.  Yes, you read that right, 6am.  Oh, and Indiana is on Eastern time, so it was really 3:30am for us!  Soon we were off to park near the race start, which was super easy since the marathon started an hour earlier than the half, and there were only 400 people doing the marathon.  I gave JMR a good luck kiss, took a pre-race picture, and once the gun was off, I headed back to the car to drive to the finish line. 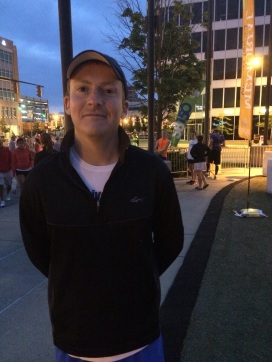 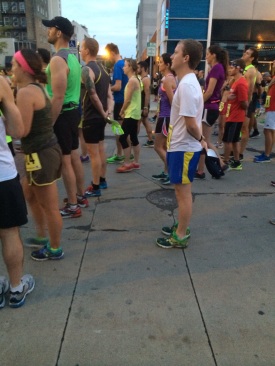 At the start line

I also took a short detour to a Wal-Mart for a iPhone 5 car charger which was a life-saver the rest of the trip.  Those map/directions apps suck the battery out of your phone!  After parking in the finish area parking lot (next to the Notre Dame football stadium), I walked to the 13 mile marker which was only 1.5 miles away.  I timed it perfectly and after waiting 10 minutes, I spotted JMR!  I got a blurry picture, cheered him on, and then headed back to the car. 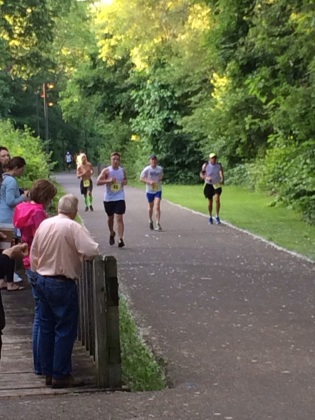 He’s the guy in the middle.

I passed the time by reading a new book I bought on my Kindle app and before I knew it, it had been almost 3hrs and 25 minutes since the marathoners started.  JMR’s PR is 3:44, and he wasn’t to excited about this training cycle…but…you never know, so I headed to the finish area.  Boy am I glad I did!  I spotted him coming up the finish line at 3:30ish, I couldn’t believe it!  I tried to take some action shots of him running to the finish, but he was running too fast 🙂 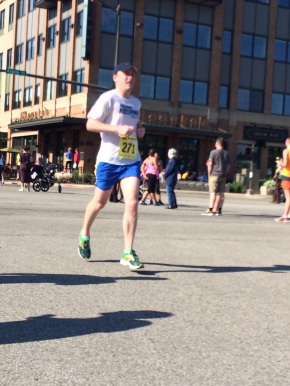 Too fast for pictures!

He finished in 3:34:49, over a 9 min PR!!!  I was soooo proud and excited for him!  I met him in the finish area after he crossed the line and gave him a big (sweaty) hug.  He looked tired but very excited.  We headed back to the car where I took a finisher pic of him with his medal and I also tried to take a selfie.  I am terrible at those. 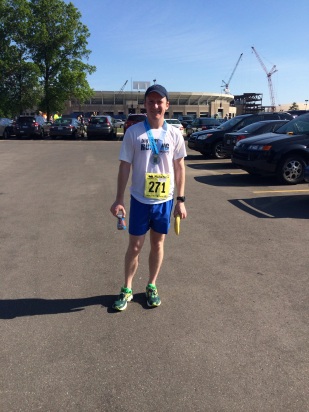 Happy with his PR. 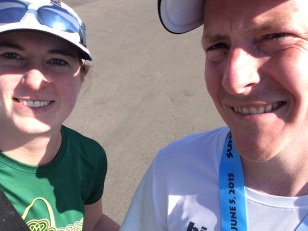 We headed back to the hotel, showered and packed up the car to head to Effingham for our next leg of our Epic Race Weekend.  I drove this part of the trip, JMR’s legs weren’t in any condition to be driving!

We arrived around 4p (stopped to grab lunch on the way), checked into the hotel, and after I messed around with some of my gear, we headed to packet pickup.  After packet pickup we went to eat dinner and I think I was asleep by 9p.  Not that I slept well, but that’s what time I attempted to go to bed.

Sunday – Cutting Edge Classic Half (I will finish writing the Race Report tonight!)