JMR and I arrived in Effingham around 4p as part of our ‘Epic Race Weekend’.  Once we checked into our hotel, I messed with some of my gear (greased chain, put yanks on my running shoes, laid out nutrition and the rest of my gear), and also checked the weather for Sunday.  Hmm…it’s going to be REALLY hot, hotter than I realized when I checked it earlier during the week…I quickly thought, oh crap, should I have brought salt tabs??  I didn’t for KS 70.3, but it also was pretty mild weather that day.  Well, too late, they are in Saint Louis and there aren’t any sporting stores nearby that would carry them, so I would just have to deal with it (foreshadowing of the events to follow).

Next, we headed to packet pickup, and once we got there I got really nervous.  I tried to logically tell myself there was no reason to be nervous, this was just a shake-out race to clear out the cobwebs and to almost treat as a long-training weekend.  However, the competitive person that I am, could not adhere to that logic and the nerves really began to set in.  After packet pickup we headed to Lone Star Steakhouse for my usual pre-race meal of steak and a baked sweet potato.  Dinner was pretty darn good, but I was pretty hungry too, and then we headed back to the hotel.  I did a few more things to get ready for the race (put race number on helmet and assemble my gear bag) and then I crawled into bed, hoping for sleep because I was tiiiired.

Unfortunately sleep wasn’t in the cards that night, I tossed and turned, and had weird race nightmares (tons of snakes in the lake??) and before it knew it, it was 4:15a, and after laying there for a few minutes, I got up and started eating my breakfast (2 hardboiled eggs and a banana, sounds strange, but gives me the energy I need and doesn’t upset my stomach) while also checking FB and email.  My friend T who did IMLOU with me had sent me a message after I went to bed, wishing me good luck and words of encouragement.  That was definitely something I needed to read!  Soon it was time to get dressed, load on up on sunscreen (ugh, more on that later), fill my water bottles and get moving! 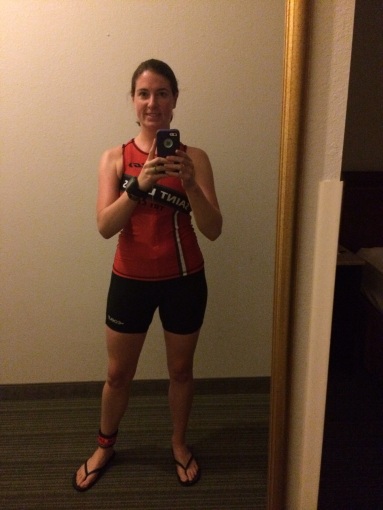 Pre-race shot in the hotel room before heading to the race site.

We left the hotel around 5:20 and got to the race start around 5:30.  We were one of the earlier ones to arrive and got a really good parking spot. After airing up my tires, I grabbed Lola and my gear and headed into transition to get all setup.  Since this isn’t my first rodeo, it only took ten minutes or so to get everything set up.  Once again I stressed over not having salt tabs as the morning announcer kept babbling on about 20mph winds on the bike and extreme heat.  Ugh.  On my way to bodymarking I ran into my coach who was also racing, which was a face I was happy to see.  She gave me a hug and also gave me a tip on the swim, that the part of the course that was near the shore was filled with seaweed (seaplants?) almost to the surface.  Oh boy.  Good to know.

After talking to a few other tri club friends racing, it was close to 6:45, when we were having the pre-race meeting on the beach, so I grabbed my wetsuit and headed down to there.  I pulled on my wetsuit, the first time even putting it on! And hoped that it wouldn’t be too crazy tight since I hadn’t worn it yet this year (well, tight around the neck, which is the worst and has given me swim freakouts in the past).  The pre-race meeting was uneventful and before I knew it we were off! 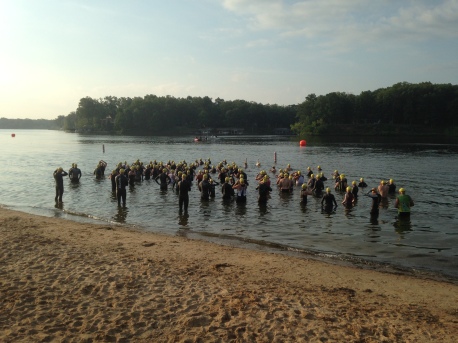 This is the ONLY wave. I told you it was a small race! 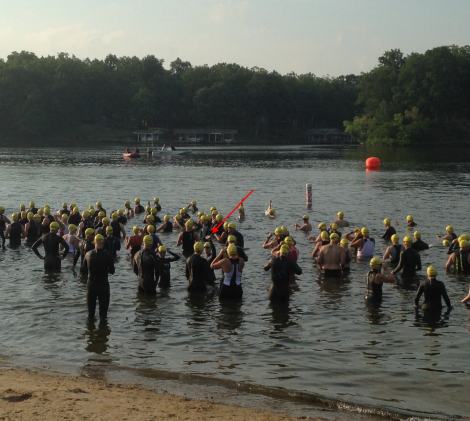