As soon as I handed off my bike, I took off my bike shoes and ran into transition in just my socks.  I was just so tired of being in my bike shoes!  When I sat down and took off my dirty socks I realized that my hands were shaking.  I was so excited that I finished the bike, and much faster than I imagined.  If the run went well, I could maybe finish in 13:30 (my secret goal)…woah!  The volunteer helping me put clean dry socks on saw my hands shaking and told me to calm down, and just take my time.  I tried to explain why my hands were shaky but all that came out was ‘I crashed my bike last year training for IMAZ, and so I signed up for IMLOU…I can’t believe I just finished the bike, I didn’t fall and it was faster than I thought I would finish!’.  (I’m sure I said it in one rambling statement just like that run-on sentence) She smiled and said she was signing up for IMLOU next year and couldn’t wait, and wished me good luck on the run!

After getting my arm coolers on (once again, very difficult when sweaty), my shoes, hat, race belt and handheld water bottle – I grabbed my four gels and stuffed them in my kit and then was off.  Well, with a quick stop at the porta potties, and then I was off. (Hey, at least that meant I was hydrated!)

However after jogging through transition I realized two HUGE issues.  #1, the gps tracker BOUNCES with every step which was incredibly annoying.  #2, the gels in my kit were also BOUNCING like crazy with every step which was also annoying and I was worried about chaffing.  I tried carrying a couple but that didn’t help the issue with the bouncing gps.  How had I not thought about this!?!?!  What was I going to do?!!?  I still managed to smile and wave at my family while fretting about this nutrition/bouncing issue. 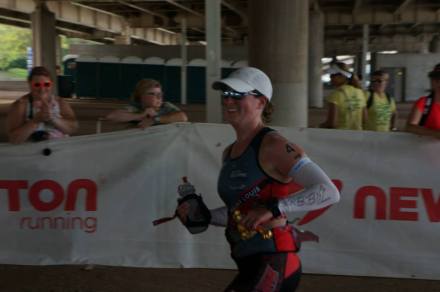 Happy to be on the run, not happy to have the bouncing gps and gels.

After running out of t1 I saw R and quickly explained the issue.  He told me to hold onto my gels until I hit the first aid station and then depending on what nutrition they had, I could decide to toss them.  That sounded like a good plan, so I set off to get to mile 1.  Not even .25 into it I just said ‘screw it’ and threw them away.  The bouncing pager made me want to cry…very silly, but it was uncomfortable and 26.2 miles is tough enough, add a bouncing/chaffing pager on a belt and it’s really uncomfortable.  And it was a long day anyways…so my patience was worn pretty thin.

I hit the mile 1 aid station, decided to just drink water and headed on.  People were already starting to walk and I didn’t want to start at the first mile marker!  It was starting to get really hot out, so after I left the aid station I continued to take large sips from my hand held.  I also kept pulling my pager belt down low on my waist hoping it would reduce the bouncing.  By the second aid station I was still really thirsty but my stomach was sloshy from drinking too much water.  I just took a small sip and headed on (the aid stations were at every mile marker), and by the fourth mile I was extremely thirsty but felt sick from drinking too much water…and I felt HOT.  I decided I wouldn’t use my handheld anymore for drinking and would just stick to the aid stations so I wouldn’t have a sloshy stomach.

After I left the four mile aid station, I hit a really hot, sunny area on the course with a slight uphill.  I tried to keep a good pace but suddenly I was feeling dizzy.  Really dizzy…and started to get tunnel vision.  Oh no.  I looked at my watch and realized that I had been running for 45 minutes and hadn’t had any nutrition or salt tabs.  The whole gel/pager thing had me distracted and not focusing on my plan.  I started walking and decided I would walk to the next aid station, take in the sports drink, water and salt tabs and see how I felt and would just go from there.  At this point, I just wanted to finish.  The thought of goals were starting to fly out the window and I was moving into survival mode.

Once I hit the aid station at mile five, I stuck with my plan AND they had wet sponges.  Those were a lifesaver and really helped cool me down.  After another minute of walking once I left the aid station I started to feel slightly better.  Not great, but felt like I could start slowly running.  I hit the aid station at mile six and took in sports drink and water and more wet sponges.  I also decided to stuff the gps in my handheld water bottle (since I wasn’t going to drink from it anymore anyways) which was a brilliant idea.  I felt so much better not having it bouncing on my waist. By aid station seven I was starting to feel like myself again and felt more pep in my step.  I also started chatting with a girl next to me who was running at a similar pace.  This was her second Ironman (to be technical, full-distance triathlon), her first being at Redman last year.  Oooh!  I told her my fate at Redman last year and then we just chatted it up about different things.  We ran the next couple of miles together and then we parted ways.  I was now feeling AMAZING. 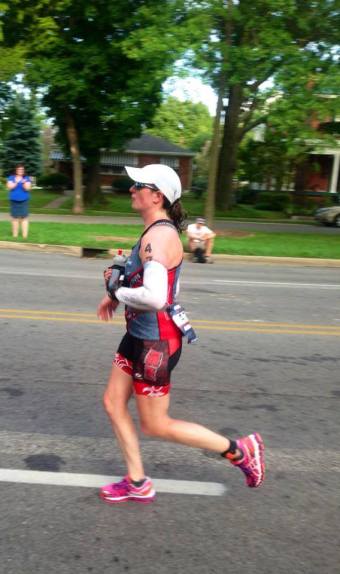 Around mile 8 after my new friend and I parted ways. I was now feeling GREAT.

I continued on, just focusing on getting to the next aid station, and taking in sports drink, water and salt tabs every 30 minutes.  Soon I was getting close to the turn around and knew that I would see my parents and family.  I was getting excited!  Soon I could hear them cheering and waved as I ran by.  I even managed to give my dad a hi-five! 🙂 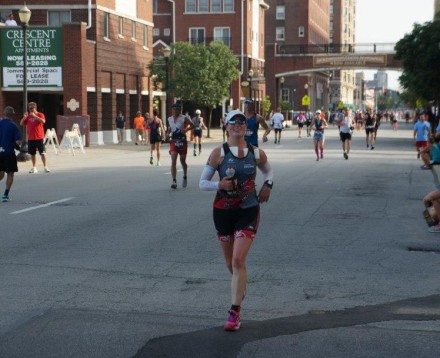 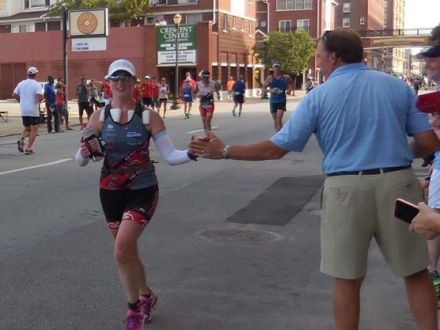 Soon I could see the finish line… I knew I would have to see it before turning for my second loop, and I thought that it would be tough mentally, but instead I said to myself ‘I am coming back and I WILL be running down that chute soon!’. I felt even more motivated to run strong.  I skipped special needs (gummy bears just didn’t sound great and I was good on salt tabs), and headed out for loop 2. 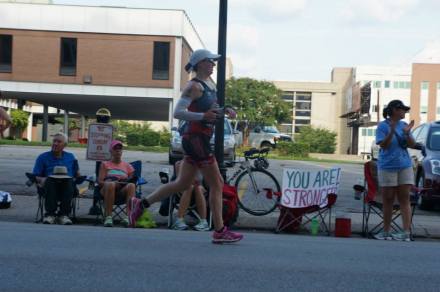 Headed out on my second loop.

I continued my strategy of just focusing on getting to the next aid station and taking in water and sports drink BUT I got to now have coke every other aid station…which tastes amazing and the caffeine and sugar help give me an extra boost of energy.  Overall I was just feeling great – the only issue was my stomach, which just felt angry.  I didn’t feel like I had to rush to the bathroom, but kept thinking if I went it would feel better.  Along miles 16-18 I ducked into porta potties three times to attempt to help my stomach but no luck.  I finally just decided that my stomach was just going to be unhappy and I would have to deal with it being angry the rest of the race (It was going 11+ hours on mostly sugar and carbs.  Poor tummy).

Before I knew it I was three miles from the finish. I couldn’t believe it!  It was also still light out so I was most likely going to meet my super secret goal of finishing when it was still light out.  I decided to flip my watch over to overall time and it displayed 12:30ish hours.  WOAH.  Woah.  Realizing that I could finish in 13 hours or ..maybe even less, I tried to pick up the pace.  However as soon as I did that my heart rate skyrocketed into the high 160’s and I started to not feel so great, so I decided I would just keep my pace down enough so I wouldn’t throw up.  Bummer but I’d rather finish strong than sick!

The last three miles I just kept thinking about the day, the challenges and what I had overcome that day, and the fact that I was just about to finish.  Over two years in the making and now I was going to get to cross that finish line and hear the words, ‘Anne-Marie Hale, You are an Ironman!’!  All of those early morning workouts on the weekends…all of those horrible long runs mid-day to train in the heat…all of those nights I was in bed by 8:30 or 9 pm (even on the weekends…poor JMR, I wasn’t much fun!)…were all going to be worth it.  Soon I was half of a mile away…I had butterflies in my stomach!  I saw my friend’s coach and she offered to take my handheld so I wouldn’t have to carry it in my glorious finisher pictures 🙂  I thanked her and was on my way headed down the chute!

I felt like I was floating on clouds!  I waved to my family as I passed them and then threw my arms up in the air in victory as I ran down the chute (cheesy but I felt the need to do it:)). 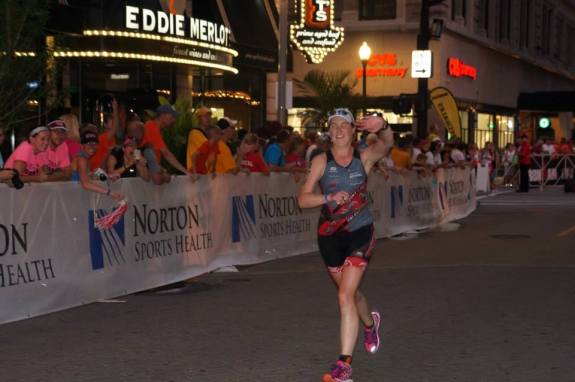 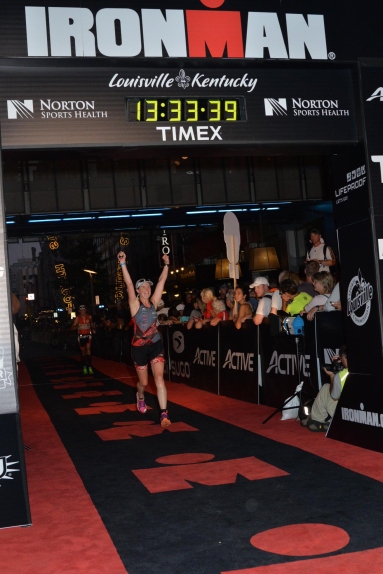 Then I heard the words ‘Anne-Marie Hale, you are an Ironman!’.  Finally!  As soon as I crossed the finish I was whisked away by a volunteer who handed me my finisher’s hat, t-shirt and placed my medal over my head, and took me to get my picture taken. 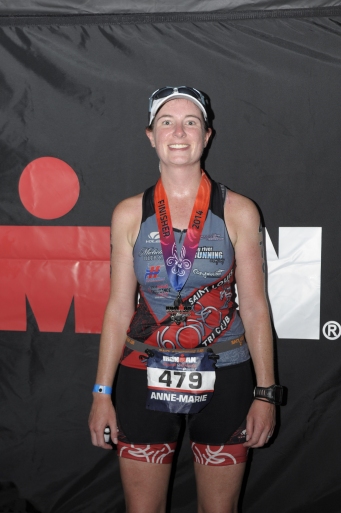 Deer in headlights? I look a little zombie-ish. Perhaps racing for 13+ hours is why…

I headed out of the finish area to see my family.  Hugs and tears.  Sweaty hugs to my aunts, cousin, my parents and JMR.  I felt amazing and still full of energy…I’m guessing that was the adrenaline 🙂  We took pictures and chatted, and then my family left to head back to their hotel (it was a loooong day for them…I honestly think spectating is tougher than racing!). 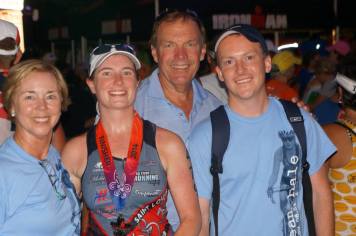 Me with my parents and JMR

I waited to see my friend finish, then JMR and I headed back to the hotel to shower and then we went back to the finish to see the midnight finishers (and have a beer!).  By 12:30 we were back in the hotel and headed to bed.  This was a day I will never forget and I couldn’t have done it without my friends, family and JMR to support me along the way. 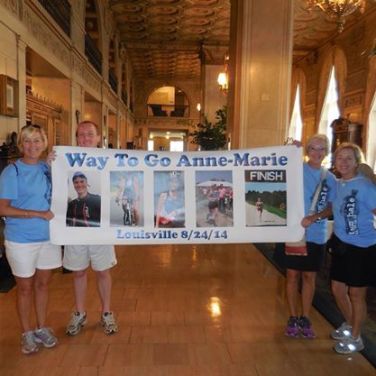 I have an awesome family. A banner my aunts put together. 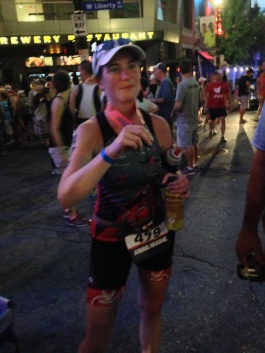 JMR’s blurry picture of me with my medal.

1 Response to Ironman Louisville 2014 – The Run