Phew, where has the time gone?  I can’t believe it’s been almost a month since I last posted!  Well to summarize, a lot has been going on!  I went to Louisville the first weekend in July with some girlfriends to ride the IMLOU bike course (I only rode 80 with PT, and T and SS did the whole 112!).  Afterwards we also ate some delicious BBQ.

We fit ALL four bikes in PT’s car! Note the towel holding two bikes together…duffle bags and a yoga mat keeping the bikes from bouncing around. This definitely looked like a professional did it 🙂

The following weekend was the New Town Triathlon weekend, with the kids race on Saturday and the adult race on Sunday, and as volunteer coordinator for the tri club, I was busy, busy, busy both days!  I did manage to get in a long ride on Saturday with some other club members after the kid’s race where we took a ferry (ooh fun!) and got in a long run on Sunday.

The next weekend I rode 80 flat miles with some headwind followed by some delicious Mexican food 🙂 and later that evening a Bourbon tasting party! 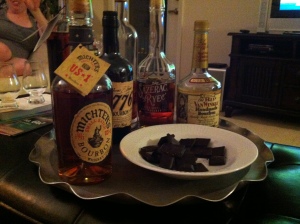 Last weekend I did my first official race of the season (for some reason I don’t count Triple-T as a race, it was more of a …’just survive’ type of event for me)  The race was an Olympic distance, 1500 yard swim, 24.8 mile bike and 6.2 mile run in Springfield, IL and PT and I drove up the night before. 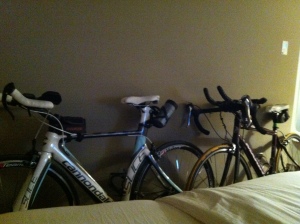 The ponies safe in our room for the night.

The swimming and biking I wasn’t as worried about, but the running, usually my strongest leg, has been really lacking lately due to trying to slowly ramp up my mileage without re-injuring my hip so I was kind of worried how the run portion would go.

Pre-race photo. It was cold that morning!!

The swim started off pretty choppy, and everytime I took a breath, I was hit by a wave which made the first half pretty slow-going.  However after the turn around, with the wind going the opposite direction, the waves weren’t very noticeable.  Once I hopped out of the swim at a slow 34:xx, I headed into transition to get my bike and go.  However, I could not find my bike.  Anywhere.  The volunteer kept pointing me to several racks but none of them had my bike…after running around for a minute, I finally realized he was pointing to the sprint triathlon racks and not the olympic.  After finally finding my bike, I quickly put on my helmet, sunglasses and bike shoes and was off!

The bike was pretty uneventful, fairly flat out and back and on the way out I thought I was having a little headwind, so I was excited to turn around and get some nice tailwind.  Boy was I wrong, as soon as I turned around I was hit with a wall of wind.  Argh!  It was at this point that I realized I was SO happy to be riding my triathlon bike because I could get into aero and hide from the wind somewhat.  Although the last four miles I was really ready to get off my bike.

Once I hit transition I hopped off my bike, took off my helmet and bike shoes and put on my running shoes and my hat and was off.  .2 miles out of transition I realized I had forgotten my race bib.  Oh no!  But the thought of going back meant that I would add on .4 to my race, which was practically half of a mile…which was almost 5 minutes.  I decided to keep going knowing that I would possibly be DQ’d (it’s a race rule that you must run with you bib on).  Off I went, a little sad, but then realized that this race was just to ‘get my feet wet’ and get myself back into the swing of things.  Dust off the cobwebs.  Boy did I do that…lost my bike… forgot my bib… go away cobwebs!

The run course was fun since there were so many club members also racing, so it was nice to see everyone during that portion.  The last four miles really hurt as my hips were not happy to be running 6.2 miles at a much speedier pace than they were used to (which wasn’t that speedy!)

When I crossed the finish line I stopped my watch and about started crying when I saw how much slower I was compared to my olympic time last year.  11 minutes.  Ouch.  Six of those were because my run time was 1 minute + slower each mile.  But I composed myself and was happy that I had just gotten out there and raced (and didn’t panic on the swim!) and then went back to the finish line to cheer the rest of my team mates in.

After everyone had finished I ate some pizza and had a coke (yum) and then we got ready to cheer in the club members that were doing the half.  We looked festive!

Cheering on the tri clubbers doing the half

After the race we headed home where I promptly ate dinner and went to bed early.  The next day I was up at 6a to volunteer at a nearby triathlon focused on beginners.  I was on the bike course at the bottom of a big hill with a sharp turn, boy was it scary having newer cyclists coming down and trying to make that turn!  One guy missed the turn and went right into a stop sign and then a police car.  Fortunately he was ok and ended up riding away after the sag wagon came and fixed his two flat tires.

To top off the busy weekend, I rode for two hours on the MCT trails, flat and boring, but also safe!

Overall my training last week was pretty light as it was a race week, so this week I’m in for a surprise.  My coach emailed me last week to let me know that my volume would really be ramping up starting in August and she wasn’t kidding!  This week I have 13.5 hours of training!  Wow!  The highest number of training hours so far this year…I’m actually excited though 🙂

Today is a rest day though, so I’m enjoying doing nothing…the calm before the storm!