I know it’s been awhile since I last posted, when I’m not running, training or racing, I don’t feel like I have enough to post about!  Even so, not too much has gone on, just the usual busyness that comes with the holidays and of course, PT.  I also have not been doing much on the workout front, as most activities were irritating my hip.  So, as a last resort, I called it quits on all activities other than PT in order to just try to rest my hips.  So as you can guess, the Icy Iron contest I was so pumped out about at the beginning of December didn’t happen.  Bummer, but I figured it was better to rest up and get better for the actual racing season rather than prolong my recovery for a virtual one.

Now that the holidays are over I’m ready to get back into a regular routine during the week and weekends, which will also include….. running!  Not a lot of it, but I got the green light yesterday from my PT to start running, but only very gradually.  As in, walk .25 miles, run .25 miles, repeat for only a mile.  Hopefully next week I can work up to 1.5 miles.  Still, it’s a huge improvement from where I was 2.5 months ago, in pain and hardly walking without limping.  Now I am finally walking pain-free and just occasionally get a dull ache in my hips from sitting too long.  I really feel that the stretching and strengthening exercises she has had me do each day have really improved my strength and I plan on keeping up the regimen (although probably only 3x a week) when I’m officially finished with PT to ensure that I won’t be returning!

I do have other exciting news, I purchased my triathlon bike on Wednesday!  A 2013 Cannondale Slice Women’s Ultegra 3.  Unfortunately it doesn’t ship from Cannondale until January 2nd, so it will be a while before I get to actually ride it, but here’s a picture to hold you over in the meantime. 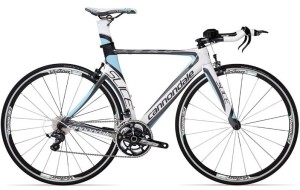 Oh, and no, I did not meet my ‘weight goal’ that I was trying to hit by the end of December (and was using the bike as incentive if I met the goal).  However, because I’ve been so disciplined with PT and staying off running so that I can come back fully recovered, I thought that seemed like a good enough reason to justify buying it (other than because I was planning on getting it anyways ;)).   I still plan on keeping Peaches, there will be plenty of rides where a road bike will be more appropriate and plus, we’ve been through a lot together, so I couldn’t just get rid of her.  We’ve had some great rides, Redman probably being our best… my dad’s 62 miler probably being the worst (for her, not me!).  Poor thing, that gravel had her shaking the entire ride.

I’m off to run some last-minute errands!  JMR and I are celebrating our Christmas tonight since he goes home each year to spend it with his family, and I have a few last-minute things to get and wrap.  One of them involving this (taken at an ugly christmas sweater party a couple of weeks ago): 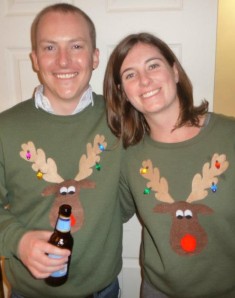 Yes, those are huge red pom pom’s for noses.

Oh yes, I made those sweet sweatshirts.  I became so attached after all of my hard work, I wouldn’t even let JMR take his home for fear that he might accidentally put it in the washer and ruin it.  I think they turned out lovely and will be making an appearance every year.