Back to the grind

I finally am sitting on the couch after a busy past two days, so I’ll keep this short.  Monday, as usual, I didn’t get up in time to get my swim in before work.  I think during my next training cycle, I’ll just make Mondays rest days, because I find that they’re the most difficult day of the week to get up anyways and adding a workout in the morning on top of that is just a set-up-to-fail plan.  I spent the rest of the day at work flying around working on different things to get ready for the go-live next week, and on top of that, my coworker who is working on it with me, was out sick.  I did manage to run out and get a tuna sandwich from Panera, and I think it will be my last.  I’m not sure what the deal is, I understand tuna can be kind of messy, but I think they make it messy on purpose.  Like they are told to do that… ‘oh and when you make the tuna sandwich, put as much tuna in it as you can, and when you wrap it up, squish it while wrapping’.  I have to eat the darn thing with a fork or most of the sandwich will end up in my lap.  Yes, this picture does make it also look gross, but it is a pretty darn good tuna sandwich, if you like tuna.  I’ll get off my tuna sandwich soapbox now.

I worked pretty late and therefore didn’t get home until late, ate dinner and went to sleep.  Living the crazy tuna sandwich life.

Today at work was pretty much a repeat of yesterday, coworker was out sick again, but I switched it up and ate a lean cuisine for lunch.  Sodium, yum!  After work I ran 6 miles at a pretty decent pace, did a load of laundry and now I’m waiting for my Kashi mushroom and spinach pizza to be ready!  Then off to bed for an early wake up call to get a workout in before work.  I also had a popsicle after my run, I forgot I had bought a box of sugar-free popsicles a long time ago when I came down with a sore throat, and found it hidden behind some frozen veggies.  It’s not even that hot out now, but it seemed like the right thing to do. 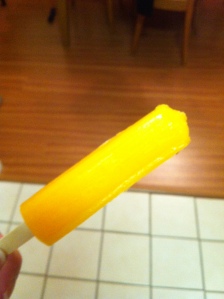