Oh man.  I’m really behind on my training updates… I didn’t realize I was THREE weeks behind.  Yeesh.  And I had some pretty big weeks with a couple of races, so this might be a very lengthy update!

Monday – 3800y swim in the am followed by yoga at lunch

Wednesday – 3500y swim in the am followed by a HARD 1:40 trainer ride after work.  I went through two bottles of water and two towels and could have used one more of each!  I was spent after that ride and wondered how I was going to run my tempo the next day…

Thursday – However I did the tempo run and pretty much nailed the workout for once while doing it outside!  I think I was determined to finally get the paces down, my body has been able to, but my mind plays games with me.  So after hitting the 3×1 mile paces I pushed the pace again after the 2 min recovery interval and ran at the planned 8:15-20 pace for the last 2 miles before the cooldown.  I was pretty pumped when I walked into our house after the run!  After work I did an easy 20 min ride followed by 10 min abs and some theraband exercises (timewise getting to the gym isn’t usually going to happen so the abs + theraband has been my compromise for ‘strength’ workouts)

Saturday – Longest ride of the year so far! 5 hour ride planned, ended up at 5:10 and 91 miles.  I rode a pretty similar route to the weekend before, just adding in a longer out and back at one part, and it was uneventful (actually a little chilly at the start, what?!).  After the ride I ran for 20 minutes, however my legs didn’t have as much pep as they did the week before, but I had ridden a bit harder and a tiny bit longer, so maybe that’s why – plus I still have a few months to get my legs used to long rides before October (I may or may not have been a little panicky about it.. silly I know).

Sunday – Longest run of the year!  16 miles!  Other than an emergency bathroom break at mile 4 and a tiny meltdown at mile 10, I got the run done and at the planned paces.  I try to avoid taking breaks so my legs know what it’s like to run for x miles at x pace, but the bathroom stop was 110% needed and ended up being almost a 10 minute stop so my legs got quite the break there.  Ugh. Then, at mile 10, I ended up losing my self-control to take ‘sips’ each mile and drank my entire bottle of water because I was SO THIRSTY.  Then of course I had to walk for a bit since I had a whole bottle of water sloshing around in my stomach making me feel like I would puke if I started running.  So that was another 4 minute or so ‘break’.  I did manage to take my 3 gels without much of a stop so hooray for that, and no more bathroom stops even though it got a little iffy at mile 15.  I spent the majority of the rest of the day on the couch.  So productive.

Monday – 2550y swim in the am followed by yoga after work

Wednesday – 2200y swim in the am followed by an easy hour on the trainer.

Saturday – Macklind Ave Mile Race!  This is a local 1 mile race I had run a few times many years ago, but haven’t in a while.  It’s a fun one, super short (a mile) AND it’s a net downhill.  I ran a 2 mile warmup, race the 1 mile downhill followed by a 2 mile cooldown.  My 6:07 was fast enough for 2nd in age group, hooray!

Sunday – Endurance Company team ride in Hannibal, MO!  We met up around 9a and rode to Louisiana, MO and back, which is around 65ish miles and full of hillllls.  It was a rough ride, but we survived and celebrated with lunch after.  To give you an idea of how tough the hills were, it took 4 hours and 15 minutes to ride the 66 miles, and that wasn’t including time stopped for mini breaks! 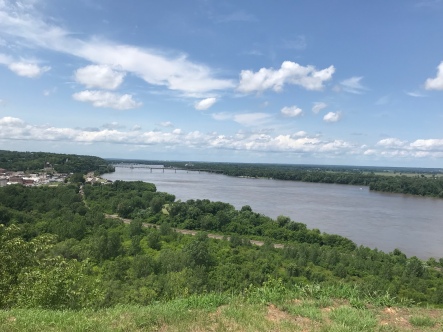 Last hill of the ride, view from the top of Lover’s Leap, a HUGE hill in Hannibal

Week 27: 7/2-7/8  An even easier recovery week, probably partly due to the fact that I raced mid-week and went to the lake this past weekend.

Tuesday – 1 hour easy on the trainer

Wednesday – O’Fallon 10k.  This race and I have a little history.  Two years ago I raced the 10k and suffered.  The hills on this course are relentless and the fact that it’s on July 4th aka HOT and HUMID also adds another challenge.  I was so defeated after the 10k that I ran the 5k last year instead and also had a pretty slow race.  Redemption was on tap this year: I was leaner, fitter and determined to get a 10k PR. 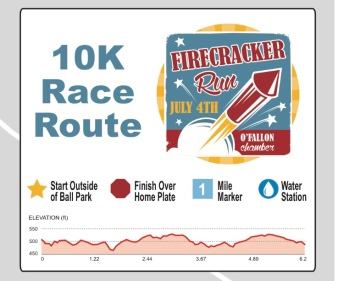 Not many flat sections on this course.

The first couple of miles were a little speedier than planned but the hills hadn’t really started yet. I had started to slowly pass several males and a few females and by the 5k had worked my way up to 5th female (there was an out and back so I was able to count the females as I came close to the turn around).  I just kept focusing on the holding the pace.  I felt pretty darn good until around mile 5 which was mostly up a huge hill and then I got tired.  And had a side cramp.  And it was hot.  And I just wanted to be done.  It was my slowest mile (creeping up to almost an 8 min mile) and a few men passed me on the dumb hill.  After the hill I picked up the pace for the last .5 or so (7:45is is about all I could muster at that point) and finally crossed the finish in 47:39 with a 7:41 pace, 1st in AG and 5th female. Heck yes to a PR and placing in my age group.  JMR snagged 3rd in his AG so we both walked away with (very small, ha) hardware.  It was a good day 🙂

Friday – Due to car issues I was forced to ride my 3 hour ride inside…boo.  1hr at IM pace, 1 hr at HIM pace and 1 hr at IM pace.  My legs were pretty wiped by the end.  I went through two hats, three towels and three bottles of water!

After the ride I headed over to my parent’s house to water their flowers and pick up a few things they forgot (they left for the lake earlier that week) and I stumbled upon their snack drawer!!  After my ride I wanted to eat all of that.  However, I stayed strong and took nothing from their drawer.  This time. 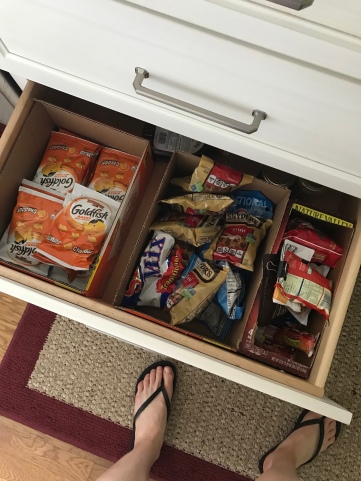 There are Cheetos AND Doritos hidden in there.

Saturday – We arrived at the lake Friday evening so my long run on Saturday was 10 miles…10 miles filled with fun hills in the Ozarks.  It was tough but I felt pretty strong and surprised myself by being able to comfortably run around a 9ish pace. 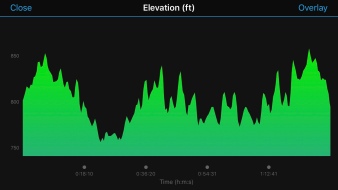 So many HILLS…I needed this route for St. George 70.3

Sunday – Easy 3 mile shakeout run.  My legs were dead and so very happy all I had were three miles to run.

All caught up!  This week the volume is going back up and I’m also on-call for work (aka attached to my phone 24/7 and in proximity of my laptop) which will make things a bit tricky… all rides and probably most runs will be inside (I might do 1-2 mile run loop close to home for my long run though), so mentally it will be a tough week.  Ok, on that note, Happy Monday!