Once I passed the mount line, I hopped on my bike and chugged up the short little hill before we headed out onto the bike course.  The first thing I noticed was the roads.  They were AWFUL.  I had read that the first 5 miles out and 5 miles back into town were terrible, so I just tried to focus on avoiding any bad cracks or bumps and told myself that soon it would get better.  And better it did get!  For like five miles and then it was back to crappy roads.  I am from the mid-west, I get what the weather can do to roads, but holy cow, these really were some terrible roads. 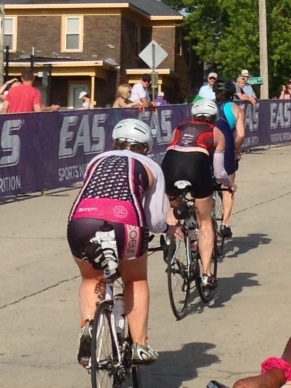 Up the little hill to head out onto the course. The crappy bumpy course.

I tried to focus on heart rate and nutrition to distract myself from the bumpy roads, but it was hard.  I also passed a toooon of people which was pretty darn fun.  When I looked at the results after the race I saw that I had passed around 70 people and 27 people in my age group moving me up to 19th place. 🙂

I did feel like I was pushing the pace, similar to how I felt at Effingham but with a little lower heart rate, but also didn’t feel like I was killing my legs for the run, so on I went with the current pace.  I was at around mile 35 when I pulled up to the second aid station to grab a bottle of water from a volunteer, however I missed the hand off and when I looked ahead I saw two cyclists had just stopped right in front of me next to the volunteers handing off water.  DO NOT STOP IN FRONT OF A HANDOFF AREA…Pull to the side of the road beyond the volunteers.  I panicked and to avoid hitting them, I tried to make a sharp left turn but (since tri bikes are twitchy and I’m not the world’s best cyclist) I ended up going down on my left side.  I looked up and feared getting run over by other cyclists coming into the aid station, however a volunteer grabbed my bike and pulled me to the side (where the two cyclists should have been too!).

I did a quick body check to make sure there weren’t any broken bones, then I checked Lola.  Check and check.  Both were good to go.  Well I did scrape my knee, but that wasn’t a big deal.  I refilled my aero bottle and then was on my way to get the bike done!  Unfortunately when I hopped back on my bike I accidentally hit my watch with my aero bottle and I was now in transition 2 according to my watch.  So no mileage and no heart rate to use for the rest of the ride.  Grr. 😦

I also was annoyed that when I ‘crashed’ a ton of the people I had passed had re-passed me so I wasted some energy riding angry and trying to get back in line where I was before!  Probably not the smartest idea.  Soon I was approaching the extra crappy 5 mile stretch back into town and I just felt like I had run out of steam.  I was tired of the bumps, cracks and lack of speed from the bumps/cracks and wanted to get off of my bike.  Well, I wasn’t sick of my bike, but I was sick of the road.

Soon I could see the little hill we would ride down and the dismount line, hooray!  I had no idea what my riding time was, but I was secretly hoping to break three hours.  However, I knew my time was slower than Effingham, plus the bike crash, so I guessed it was closer to 3:05. 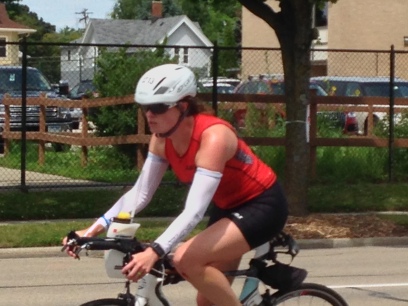 I wanted to get the heck off the roads and start the run!

Off the bike I went and ran into transition!  I quickly racked my bike (hooray, I saw lots of empty spots around my rack, so I must have had a good ride), switched into my running shoes, threw on my hat, grabbed my gels and I was off.  Here we go!  My favorite part, the run!