As soon as I ran out of transition I saw JMR and quickly gave him a thumbs down.  I really had to pee (which is a good sign that I was hydrated, I guess?) so I headed into a porta-potty and then I was officially on the run.  JMR took a picture of me as I was headed out and I don’t think I even tried to fake smile.  The first mile was awful.  I looked at my watch and ran around 10min/mile which isn’t terrible for the first mile, since I usually want to start out conservatively, BUT, I wasn’t running that slow to hold back, that was all I had in the tank. 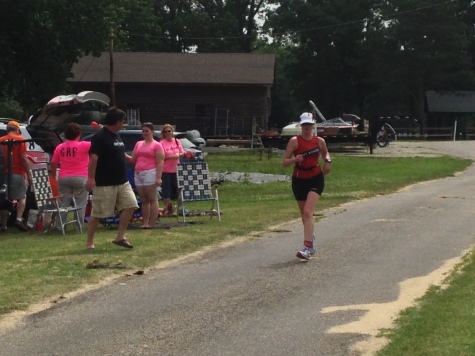 I wasn’t feeling so great.

I passed the first aid station and grabbed water and Gatorade, hoping the Gatorade would give me much-needed sodium and energy.  It did not.  Mile 2 was worse.  After more Gatorade and water I set out to run mile 3 and then felt the nausea increase with a new fun side of dizziness.  I had felt the same way around mile 7 of the run at IMLOU and it was a combination of needing salt and calories, but based on how I felt coming off the bike and having fueled correctly, I knew it was mostly from lack of salt.  Then the walking started.  Every time I started to run I thought I was either going to pass out or throw up.  Maybe thinking I would pass out was extreme but I would start to feel woozy and didn’t really think this was the race to push myself to run through that feeling.  It wasn’t even my B race!

I passed my coach and was embarrassed for her to see me walking, but I didn’t really know what else to do.  I shouted out ‘you’re kicking butt’ (she was doing awesome), and I just kept walking.  I finally reached the turn around at 3.25 (the run is 2 loops), took ice, water and Gatorade and set out to do 3.25 miles to get to the turnaround for loop 2. Miles 3 & 4 consisted of a lot of walking, maybe some quiet tears of frustration and then the thought of a DNF.  I told myself this wasn’t my A or even B race, I was in a hole and could not get out (damn you salt tabs!!!) and honestly I did NOT want to do this anymore.  I had really wanted to break 6 hours and at this point, finishing in even 6:30 didn’t seem possible (I remembered that with a 2 hr run at KS I finished in 6hrs… so if I was moving at my current pace the rest of the race I would be pushing 6:45+).  I understand that it takes determination to finish despite how your day was going, but this wasn’t my first half, I didn’t have anything to prove and I really just didn’t want to be walking in the 90+ degree heat with practically no shade, feeling nauseous and dizzy for another 9 miles.

I shuffled on, managing a little running but more walking.  It was painful to see my watch beep with mile splits in the 14-15 min/mile range.  I reached the mile 5 aid station and after grabbing water and Gatorade I saw a bottle of Enduralytes (the brand of salt tabs that I take).  OMG.  I asked if they had salt tabs and the volunteer looked confused, and then I pointed to the bottle and she said, ‘Oh is that what those are?  Someone else asked for salt tabs, whoops!’, she handed me four tabs, I took two and saved the other two for later.  I came into mile six, the turn around, and saw JMR and pretty much wanted to cry.  I told him that I was dizzy and nauseous and was doing a lot of walking.  He told me that everyone was struggling and to take my time and just be careful, it wasn’t worth pushing myself and risking something bad happening.  It was reassuring to hear him say that, because it sounds like on top of the salt tab incident it was a tough day for most people regardless.

I headed out to do loop 2, started to run and decided I would once again try to run to each aid station and then walk though the aid station.  Once I reached the same aid station with the Enduralytes, I took 2 more with water, Gatorade and ice, and set out to head to the next aid station.  I managed to mostly run, with a few walks, but was definitely feeling better.  I was no longer nauseous, but now the heat was getting to me so I could run, but it was tough.  Once I got to the next aid station I noticed that they had Enduralytes too, hidden behind the water jug, and asked for 2 more. Darn!  I wish I had noticed they had these when I first started the run….that *might* have turned my run around, but who knows, maybe not.

I made it to the next aid station, which was the turnaround, thank goodness. Just a little over 3 more miles to go I took the 2 salt tabs I had saved from earlier, drank water, Gatorade and took a cup of ice to carry while I ran.  There was more walking…and then I decided to flip my watch over to see what the total race time was.  I was surprised that it was just a little under 5:40…huh?  I was expecting it to be 6+hrs?  Then I realized that, yes, with a 2hr run at Kansas I did finish in 6 hours, BUT I also biked 15 minutes slower that I had today.  Oh!  Wow, maybe my finishing time won’t be 7 hrs.  More like 6:10ish if I could keep up my pace!  That gave me a small boost of energy and I had more pep in my walk/run to the next aid station.

Once I got to the next aid station, once again I took 2 salt tabs, water, Gatorade and ice (I was probably overdoing it on the salt tabs, but with 2 miles to go, whatever.), and headed to the final aid station before I would head towards the finish line.  I managed to actually run the entire time, so happy that I was almost done.  I hit the final aid station, took water, Gatorade and ice and after doing a little walking, I saw I had .8 left to go, so I picked it up and ran to the finish line.  6:11:xx

Of course I was able to sprint it in, I had hardley run at all!  My legs felt great 🙂

I was so happy to be finished, but also so sad that I completely died on the run.  I was on my way to a 20 minute PR which obviously did not happen.  This was my slowest half-distance tri, but I did learn a valuable nutrition lesson with salt tabs.  I will never forget them again!!

After the awards ceremony I went back to transition to get my gear, packed up in the car, took a wetwipe bath and changed, and we were finally on the road headed back home.  It was a long but fun weekend. 🙂  Next up, Ironman Racine 70.3!  Only six weeks away…and I’m determined to have a good run!

1 Response to Cutting Edge Classic Half Race Report: The Run