Last week was a tough one, not nearly as tough as my workouts are going to get, but tough enough for now 🙂 My legs were pretty darn tired Sunday night. Just a quick update, nothing too exciting going on with training….

My workouts during the week were more of the usual…

Saturday was a busy day – I had a 1:30 ride followed by 2 mi run (+ the missing swim from Saturday).  That night JMR and I were also invited last minute to attend to a Black Tie Charity Gala because my aunt had an extra spot at her table!  I was excited to go, because JMR and I were going a couple of months ago, but plans changed.  We had to rush to a nearby tux shop on Friday evening – thank goodness they had his size and we able to have it ready by Saturday.

After we both got our workouts in for the day (JMR is still training for the full Illinois marathon in April, so he ran 18 yesterday. Ouch!) We lounged on a couch for a bit and then got ready.  We had a great time and managed to stay out way later than I thought we would…almost 11:45 (come on folks, that’s late for me….I am a 9p bedtime kind of gal these days)!

(I should have a picture of JMR and I all dressed up soon!  Somehow the picture we took never got sent to my email)

Although sadly I woke up to ice / snow covering the ground and a Facebook post stating that my gym was closed for the day.  Boo Hiss.  I had a tough workout yesterday, but I was antsy to get moving and wasn’t in the mood to have a rest day.  I quickly text my coach to ask what she thought I should do since swimming and running were both out (no way I was going to risk running outside and slip on the ice) and so she gave me a trainer workout as well as instructions to do some core after.

The trainer workout kicked my butt!  I’m not sure if it was because I rode for 1:30 the day before combined with running (plus, I’m riding in tri shorts, less padding…trying to get used to my saddle faster…so…it’s a tad more painful) or because I didn’t eat breakfast before, but regardless I was absolutely spent by the end of my hour on the trainer. 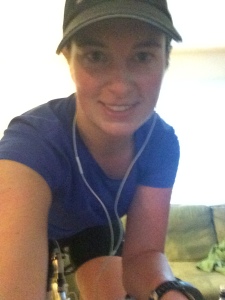 I am horrible at taking ‘selfie’s’…however I knew you were dying to see a pic of me in action on the trainer…since that’s where I spent most of my time this week/weekend (stupid snow!)

As for the rest of the day… it was spent hanging out on the couch and in the kitchen while the weather was icky.  I did manage to rush to the store early in the morning because I realized I had no food (we’re talking just eggs, a banana and a sweet potato.  Sad stuff), and picked up ingredients for a slow cooker roast as well as some other ingredients to cook up for the week.  The roast turned out pretty well, I had leftovers yesterday for lunch!