Well, as disappointed as I am that I’m not able to race my biggest planned race of the year, IMAZ, I am trying to move on and think positively.  Things could have been much worse, as I said before, and I’m lucky that I’m already healing and am cleared to do some activity.  So, the best way I know how to move on and not dwell on what wasn’t meant to be, is for me to plan my next season while I am working on recovering from my injury.  🙂

My immediate thoughts while I was sitting in the club tent hours after my crash was to sign up to volunteer at IMAZ again this year and register for 2014.  However as time went by, I realized that I didn’t really want to spend money three times to go to AZ to do one race!  I already went once to volunteer in 2012, then I would be going again this year to volunteer and finally (hopefully) racing next year!  That is a lot of airfare and hotel costs for one race.  Plus, training this late in the year honestly isn’t fun.  It’s getting cold and dark out earlier and almost everyone else has already wrapped up their triathlon seasons.  I didn’t want to do that again in 2014 so IMAZ 2014 was out.  So what was my next option?

I knew that I really wanted my first full triathlon (140.6 miles) to be an Ironman brand, however that only left me a few options considering almost all of them were already full for 2014.  My three options were: IM Texas, IM Coeur d’Alene and Ironman Louisville.   As I weighed the pros and cons between the three, I realized Texas was going to be too early in the season for me since I wouldn’t get back to fully training until January.  So it was between CdA and Louisville.  Both had good pros and cons, but after sleeping on it for a couple of nights I finally decided that I would do Louisville!

It just made sense in that it gave me sufficient time to build up my base and was also only four hours away, so it would be easier for my friends and family to come support me if they wanted to.  I spoke to my coach and we agreed that I would start officially training again in January.  So, until then I am planning on building up my biking endurance and (hopefully) running endurance when I get cleared on November 4th to try to start running.  Dr. O said that running might be uncomfortable still at that point, so hopefully it isn’t too bad and I can push through it to get running again.  Fingers crossed!

So other than planning my next Ironman attempt, I also have a few other races along the way, and the first one I’m getting pretty excited about 🙂 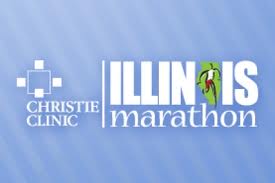 The Illinois Marathon in Champaign-Urbana on April 26th….and the best part?  JMR is doing it too!!!  I’m so excited to train together (or at least do our long runs together)!!  We had so much fun running together in August and September while he was also training for his first half-marathon on October 27th, so I’m definitely looking forward to that again.  Also, I haven’t run a marathon since 2007, so it will be nice to finally run one again.  Injuries in the past always interrupted my training (I trained for marathons in 2009, 2010 and 2011)…so the theme for this marathon training cycle will be stretching and strength training!

I also plan to do a couple other triathlons, another race I’m pretty excited about, Ironman Kansas 70.3 on June 8th.

I’ve always wanted to do Kansas, I’m not quite sure why…it’s typically hot and hilly…but I’ve heard such great things about it (plus, it’s a pretty good simulation of IMLOU’s course), so it’s on my list this year and is perfect timing!  It will be a nice tune up race before I get into my heavy training volume in July.  I also tentatively have the ITU World Triathlon Chicago Olympic on June 29th, however depending on my budget, I might not end up going.  Finally my last triathlon on the season will be Ironman Louisville on 8/24!

So that’s what I have planned for 2014 and I am getting pretty excited about it.  I already am reflecting on my training cycle this past year and the mistakes I made that I want to avoid (not getting up early and getting in my workouts and then trying to do two long workouts back to back after work. Ugh.) and also areas I want/need to improve (aka, get my butt in the pool more than 1x a week – no excuses!).  I know there isn’t such a thing as a ‘perfect training cycle’, but in some ways I’m excited to get back out there and try again, especially (knock on wood) having a stronger running base (which is my best area) than I did last year.

Now off to a meeting and then to the gym after work!