This weekend was pretty busy – I was up Saturday at 5:30a to get ready to meet some friends for a 70 mile ride out in Columbia, IL.  The original plan was to do the 60 mile charity ride that started at 10a, however because the temperatures were supposed to be super HOT, a 10a start wasn’t very smart.  So T (she was the awesome girl I trained with for Redman last year), PT and I decided that we would do 30 miles with one group early in the am and then do 40 miles with a charity ride that started at 10a (there were 20, 40, 60 mile routes).  I was also excited to try out my new arm coolers I had bought for myself as a present, since they were supposed to help cool your arms and also block out the sun.  After finishing getting our gear ready, we all headed out.  After a few miles, PT, T and I noticed how many turns we were doing and after 10 miles we decided to turn around, rather than after 15 miles, so that we wouldn’t get lost on our way back! Bummer, so only 20 miles done so far, maybe the 60 mile route would be in our near future rather than the 40?

Once we got back we re-applied sunscreen (I obviously missed a spot or two, more on that later), re-hydrated, ate a bit and then picked up our packets and were ready to go after 45 minutes.  We had a few other club members join us for the charity ride which made it fun to have some new company. 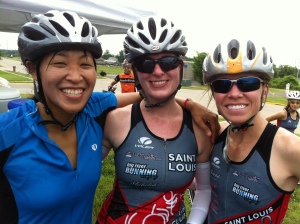 The first 20 miles of the charity ride were really really hilly!  I haven’t ridden any hills on my tri bike yet and it was tough.  I didn’t feel as powerful and on top of that, constantly changing my gears on my tri bars rather than my bars next to my hoods was driving me crazy!  Some of the hills I almost didn’t shift in time and could have possibly toppled over!  I’ll just chalk it up to learning curves and assume that it will get easier over time.  It was also getting really HOT.  The earlier ride was pleasant but now, the sun was out and shining.

After 20 miles there was a rest stop where the group met up and we debated whether to continue and stick with the 40 mile loop or attempt to do the 60 mile loop.  At that point, I was crabby, hot, tired of hills and in no mood to do 40 more miles, so I decided to stick with the 40 mile loop and ride 20 more miles.  PT said she would ride with me, and T, who has IM Louisville (and is in much better shape than me right now!) coming up in August, was ready to do the 60 mile loop!  So off we went in our different groups to finish the ride.  Fortunately the rest of the 20 miles were pretty darn flat.  The sun was out for part of it and it did get warm, but there was wind (a headwind!) and some clouds so it was much much more pleasant than the first half.  Also, I rode the first half solo, so it was nice to chat it up to PT, which always makes the time fly by faster.

Finally we were rolling back into the parking lot and ready to get off our bikes.  After loading them up, re-hydrating, I slowly put on my running shoes and hat to attempt a run.  PT decided she would join me, and after saying we would do 30 minutes… I then decided 15 minutes sounded ok…and then 10. 10 minutes.  It was 92 degrees according to my phone which meant it was probably hotter than that with humidity and NO shade where we were running. The run hurt.  The poor little lonely mile we ran hurt!  After we finished we both sat in the shade to try to cool off.  After we felt like we could muster up some energy, we went to go change, get a beer at the finish area and wait for T to come in.  We had big plans of BBQ when she finished 🙂

It felt great to change, the beer was even better, and sitting felt amazing.  How have I gotten this much out of shape?  This ride seemed really tough, yet I rode one similar a month ago (at TTT, and even more than that over the course of a weekend!) and it just didn’t seem as bad?  Maybe because of the heat?  Maybe it was the new bike? (I rode aero more than half of the time!!)  Who knows.  I just know that I need to keep getting back out there and getting more rides in 🙂

As we were waiting, the clouds started to roll in and it started to thunder.  We both were getting worried about T, since the last time she called us, she was still at least 20 minutes away.  As it thundered more, the finish area was being broken down and PT and I headed to her car.  10 minutes later we saw T coming through, hooray, she finished!!  80 miles!!  A distance PR for her 🙂  No sooner than a minute after we loaded up her bike, the skies opened up and it started raining.  We ran into the BBQ restaurant and as soon as we got in, it really started pouring buckets!  The food was amazing, and after the beer and BBQ I was ready for a nap!

Back to the title of this thread – after I got home, I unpacked, started laundry (boy does this sport really build up a lot of dirty, smelly clothes!) and got ready to hop in the shower.  I did a quick check to see if I had a weird tan line from the arm coolers, which I did not, but my back hurt.  Gah.  I had missed the lower part of my back and I was burned.  Grr. Now it looked like I had red wings on my back.  This is going to be the ultimate summer of tan lines.  Note to self, do not forget that part of my back again!  I have done more research and there is a ‘shrug’ type of arm cooler that also goes over your back.  I might have to buy that if I can’t get this sunscreen thing down this year. 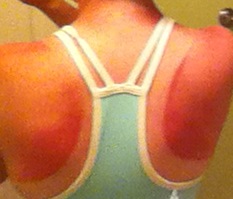 Ouch. The picture makes it look more red than it really is…I promise..

Sunday I slept in a bit late and ran a miserable 3 miles in the heat and humidity.  Never again!  getting up early and getting in a good run is much better than a couple of extra hours of sleep on the weekend.  I can take a nap later if I’m tired!  Then I headed to the pool for a 2000 yard cool down swim.  Next up was Target and Trader Joes for food and other items.  I also got a lot of things organized when I got home and did three loads of laundry.  Did I mention that this sport is laundry intensive???

Now I’m getting ready to head to a meeting and start the workweek!