…and the theme for the week is?

Well, this week has two themes and neither has much training involved (well, not until this weekend)!

The first theme is ‘Operation Pack for Triple-T’ – during my free time this week I have been wracking my brain putting together a packing list for this weekend, which doesn’t just involve clothes like a normal vacation weekend would, it’s packing for four races (a sprint, two olympic and half-distance), which also includes the possibility of all types of weather: low 60’s and cold, high 80’s and hot and rain as well.  Ugh!  Additionally, it isn’t like I’ll be packing one item for the bike in case it rains, I have to pack several because I won’t want to wear the same smelly jacket, etc all weekend.  Fun!  I’m also kind of stressed about how all of this gear (enough for two people, since R is riding with me) + 3 people, 2 bikes, a cooler, 2 wetsuits, helmets will fit in my little car…blah!

Taken at 5a this morning, hence the lack of light in the picture. Less organized looking than usual (there is still some form of organization, it’s just hard to see in this ‘lighting’), which is just about how I feel about this race weekend.

On top of that, (as part of the pack for Triple-T theme), I am getting a trailer hitch put on my car so I can get a bike rack tray for my bikes (thank you mom and dad for my early birthday present!). 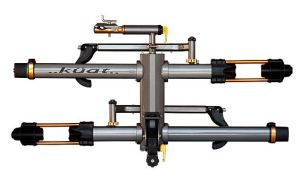 Which is awesome and a much safer way to transport bikes longer distances, but…… the hitch is getting installed today at 4p and then after that I am heading straight to the bike shop to get the bike rack tray put on.  After that R and I are packing up our gear this evening…. and then waking up early tomorrow to hit the road at 5a.

Phew.  I need to sit down and take a deep breath after typing all of that.

On to the second theme of the week ‘Operation Hip’ (isn’t is always though?) along with going back to PT Tuesday morning, doing lots of stretching and strengthening exercises, I also had an appointment Tuesday afternoon to see a therapeutic massage therapist that my coach recommended.  She does ‘adjustments’ but by only using your muscle, no popping or cracking joints around.  It was pretty interesting… I’m still a little skeptical, but here was her analysis: One leg was longer than the other and my hips were pivoted a bit, so she did all types of muscle pulling and releasing to ‘fix’ these issues.  She also said that my left hip joint was hardly mobile and that’s why my right hip was taking the brunt of things, and adjusted that as well.  I could tell a difference when I left, I felt lighter and that I was walking with better posture

Today I woke up still sore, especially my hips, so I felt a little disappointed and frustrated (and it wasn’t cheap either) but I after talking to my coach, she felt the same way for a day or two but then felt much better.  Fingers crossed that I can run part of the races this weekend!

So other than work, Triple-T and hip stuff, that’s about all that’s been going on this week.  I managed to run one mile.  Whoo!  Talk about taking a taper seriously 🙂  Back to work so I can leave at 3:30 for my trailer hitch! (I never thought I’d be so excited about getting a trailer hitch put on my car, ha)