…is kind of lazy.  At least if you’re me.  Which is why it took me almost two weeks to post my Redman race report.  But I did lie a little in my last post, as the 2012 tri season wasn’t ‘completely’ over after Redman, but I’ll get into that in a little bit.

I woke up Monday morning with my eyes on fire and decided to stay in my glasses since I could hardly tolerate my contacts.  I somehow managed to go to Little Shark to purchase the wetsuit I rented and chit chatted with one of the sales ladies about my race, and her immediate response to my run was ‘Nutrition, nutrition, nutrition’.  I still have a lot to learn about training, and as she said, triathlons at a half distance or longer are really four disciplines: swim, bike, run, nutrition.  Enough said, I learned that the hard way.  I plan on taking enduralytes the next time to help avoid the huge bonk, since my food nutrition was pretty good, but my electrolytes were probably pretty off.

After spending a couple more hours in pain (I drove to and from Little Shark with my sunglasses over my glasses, my eyes were that sensitive), I made an appointment with my eye Dr.  Well, as it turns out, I wasn’t crazy, my eyes were angry, in fact I had managed to scratch my left cornea.  My eyes were mad and no longer can tolerate contacts overnight … AND I might have to be in glasses for a month until my left eye healed.  OMG.  How on earth was I going to maintain my fitness and be ready for the half marathon on the 21st in glasses?  I can’t run in glasses, heck, I have trouble walking down stairs in them.  Ugh.  I guess I would be taking some time off for running for a while.  Perhaps it was for the best since I’m sure my body needed a break.

However, on Tuesday I decided to do my favorite spin class after work since I could do that ok in glasses and not worry about falling on my face.  It was weird to go since I had ‘banned’ myself from spinning since May in order to make sure I got in as many outdoor rides as possible, but I was also excited.  Unfortunately since I wasn’t sure if I’d be up to spin on Tuesday I didn’t sign up ahead of time and was on the wait list.  However I was able to get in!  I was super happy to be back spinning, but after riding outside for so long, I realized that this class really didn’t mock riding outside much at all, it was a great cardio workout, but probably not good for training purposes. I think some of the other instructors classes are more structured to match cycling outdoors, but I love the music in this class.  Boo hiss.  That meant I would be spending most of my rides early next year when the weather wasn’t ideal on the trainer.  Regardless, it was a great workout and I was happy to get my sweat on.

The next day my legs were crabby, my motivation was gone and I decided to take the day off…and the next, and the next.  Finally when I went back to the eye Dr. on Friday I got the good news that the eye drops she prescribed me worked really really well, and my eye was healed!  I got the green light to wear contacts for a few hours each day during the weekend and then I could wear them all day during the week.  That was the kick in the pants that I needed, and I woke up early Saturday to do my long-ish run.  I ran 11 miles around a 9:04 pace which I was pretty happy about since my legs had been pretty lazy during the week.

After the good run, I gave myself the green light to do the last minute tri I had been eyeing all week.  I wanted to get one last tri in, I was physically prepared for it and I also wanted redemption on the run.  Now, granted I had done a long-ish run on Saturday, so perhaps the run might not be awesome, but I still wanted to try.   I also thought perhaps wearing really bright compression socks Saturday afternoon would help freshen up my legs too. 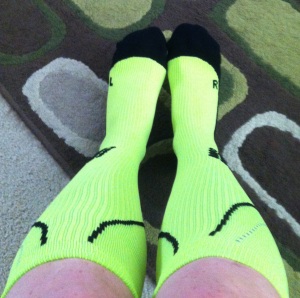 So I got up at 5a on Sunday, packed up my gear, put Peaches on my car bike rack and set out to drive to Rend Lake to race ‘Last Tri’ (that’s really the name of the race).  On the drive I was tired, giddy and excited.  My last tri race of the season, was I really doing this?  Solo, not knowing anyone going and no fans to accompany me.  It all felt very secret.  So secret, in fact I wore my road ID bracelet in case something happened to me since no one there would know who to call!

I arrived at 7:40 and immediately headed to registration.  On the way I ran into two club members I’ve trained with over the summer and who also did Redman, hooray!  I was pretty excited to see them!  I quickly registered, got my bib and headed back to the car to get my gear.  On the way back I ran into another club member – I was starting to feel pretty calm and pumped to see familiar faces.

I took a quick picture of my bib, swim cap and free cereal sample to send to JMR to let him know I had made it safely and was getting ready to race! 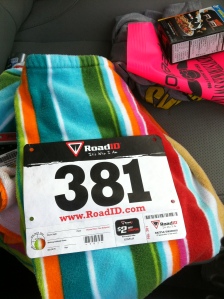 Next, I gathered up my gear and hiked back to transition to set up my stuff.  Per the slowness during Redman, I had decided that this would be a no socks race.  Also, I was going to test out taking off my wetsuit by myself.  That kind of freaked me out.  I envisioned a ten minute transition as I wiggled on the ground trying to get it off.

Soon everyone started migrating to the beach and after waiting for EMT to show up, the long course group was off and swimming.  I was doing the sprint distance because riding 42 miles on the longer course did not sound like fun, so I stuck with swimming 750 yards, biking 21 miles and running a 5k.  Short but a good way to end the season.  Soon I was wading in the water ready for the gun.  The water was chilly!  I was so happy I was an official owner of a wetsuit, because I really needed one for this swim!  And then, the gun went off!  There were only 30 or so women in the sprint, so the start wasn’t too chaotic and before I knew it, I got into a really good groove, was breathing bilaterally and felt strong.  I could see a few pink swim caps (the color my wave wore) ahead of me, but not too many, I was in the front end of the group!

The next thing I knew, my hands hit the muddy bottom of the lake and I was up and running out of the water and attempting to pull my wetsuit off.  Not happening.  And the nausea!  Why do I always feel seasick after swimming!  I waddled up the swim to transition area and finally after reaching my bike was able to yank my wetsuit down and step on one of the arms to pull it off.  Phew!  Next I threw my bike shoes on, put on my helmet and sunglasses and was off!

The bike was pretty uneventful, as most of the bike legs of my races are, but there was some nausea thrown in and my legs were anything but fresh.  Foof.  I thought that wearing the compression socks on Saturday after my run would work some magic but apparently not.  I managed to range between 18-19 mph but it didn’t feel effortless.  And what was up with the nausea?  At least I only let one female pass me, so based on where I thought I was after the swim, I was either in 5th or 6th place in the women’s division.

Once I reached transition I hopped off my bike, switched into my running gear and was off running.  Woah.  Ok, just woah.  My legs were pissed.  Like 8:30 minute-mile pissed, and they hurt!  Aww… I was looking to run 7:15’s 😦  I guess it was too much to expect from my legs after the run the day before and maybe they were a bit tired still from the half last weekend.  On top of the sore legs, nausea kept creeping back.  I was puzzled.  How could I have made the same mistake again?  I wasn’t sure, but at that point, there wasn’t much I could do, so I just tried to hold on and move forward.  Fortunately no females passed me on the run, so I managed to hold my place.  Also, I actually managed to figure out my Garmin’s multi-sport mode, so I could see my pace!  At least that was a success!

When I finished I saw my times, swim was great (1:53 pace, which is good for me), bike was ok 18.2 mph, and run was sad.  Very sad.  8:27 min miles.  However, I did manage to finish 6th female and win my age group!!  I’ll take it!!  I had met my super secret goal of winning my age group during this tri season and I was extremely pumped!

I waited for the other club members to finish the long course and they both did great (the other member wasn’t racing, just cheering) and won their age groups as well!!  I stayed for awards, received my medal and finally got back home around 4:30p.  What a long day, but it was worth it!  This time I’m not lying when I say the 2012 tri season IS officially over! 🙂 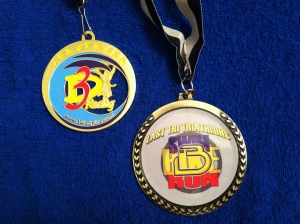