Since I’m racing more this season I figured I better be a little speedier with my race reports before the next race is here!  Granted my next big race is five weeks away, but time flies and memories fade so I might as well get this one done!

So a little backstory to this race.  I was originally signed up to race the Illinois Half (70.3) in Springfield, and this year was it’s inaugural year, but due to some unknown park fees costing the race company more than they could afford, the race director had to cancel the race.  We were emailed a long email as to why they had to cancel, but that was what I gathered and my summary.   I knew doing three 70.3’s in three months was maybe a lot of races, but I had my heart set on racing since my birthday was the Thursday before the race and I was treating the race as my birthday present to myself.  So as luck would have it, there was another 70.3 the same weekend, and it even closer than the race in Springfield, easy decision, right?  Well… the course was the complete opposite, except for the swim (it was flat :).  This race was hills, hills and more hills on both the bike and run.  However after thinking it through, I decided to just go for it.  Chattanooga has hills, so bring it!

Since the race was only an hour away, I didn’t have to get a hotel and instead got up around 3:45a and left around 4:30a.  I knew rain was in the forecast, but was hopeful it would miss us, but it didn’t and I was pretty bummed while driving through rain and really bad lightning.  I wanted to race, but I also wanted to be safe, and I wasn’t sure if riding in these conditions was worth it.

I arrived right when transition opened, but with the rain I didn’t want to set anything up because it would just get soaked.  Also, in the back of my mind, I wondered if they would just cancel the race (deep down I was secretly hoping they would).  However, when I learned it was first come first serve to transition, I took my bike out of the car and made sure to at least get a decent spot in transition and then headed back to my dry car to wait.  The rain eventually stopped, but the lightning continued.  I finally decided to set up my transition but put everything in plastic bags to keep them dry.

When it got close to 7:30a, the time of the swim start for athlete’s racing the half, I headed down to the beach only to learn they had delayed the start to 7:45 due to the lightning.  I headed to get in the porta-potty line, and saw more big flashes of lightning strike.  Yikes.  I thought for sure they would cancel the race.  After more waiting, the race director had everyone move away from the beach and closer to transition for a race announcement.  We learned the swim was cancelled (guys, I’m 3-3 for triathlons having a shortened or cancelled swim…boo), but they were still planning on having the planned bike and run (contingent on how the weather continued) and that we would start with a 1 mile run to help space us out on the course for safety.  Ok! My first duathlon!

I had no idea how to approach this, but I knew I wasn’t going all out on the run as I didn’t want to start the bike with a crazy heart rate.  Also given the conditions, my head just wasn’t in race mode.  This was a ‘fun’ race, not my A race, and I was worried about racing in the wet conditions and crashing, so I was not planning on ‘racing’ the bike.  I then decided this was going to be a good training day at a hard effort, but I wasn’t going to stress about things like I would during a race.

We lined up behind the men and then I noticed that hardly any females were racing the half!  There were like 12 of us!  One of the women was asking about age groups since the didn’t mark our calves, and when she realized she was the only one in her age group another women cheered ‘Podium! Just finish the race and you’ll podium!’, everyone started laughing, which put me in a good mood and ready to just enjoy the day.  Then five minutes after the men started, off we went.  Some women really took off! I ran at a high 7/low 8 pace and just went with it.  I made it to transition, did my thing and then realized I didn’t want my running shoes to get wet if it rained while I was gone, so I took the extra time to get a plastic bag out from my transition bag and wrap them up. 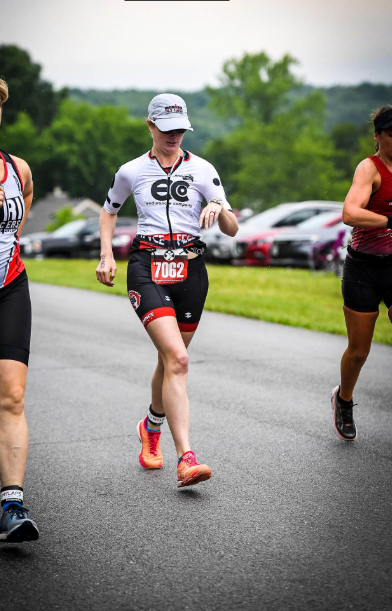 I look like I’m power-walking, which is kind of how I felt compared to those ladies ahead hauling ass.

Then I was off on my bike, riding cautiously and unsure how the ride would go.  I already knew my bike split was going to be slow with the almost 3k of elevation gain, but now also with the rain, well, my expectations kind of flew out the window and the goal was to keep the rubber side down.  Around mile 20 the rain seemed to slow and I realized I was feeling good and was still continuing to pass people, which was encouraging.  Although I have to admit when I was close to the end of the first loop I contemplated just calling it and DNF’ing, as the skies were still pretty dark and I wasn’t sure what weather we might still run into.  However I didn’t even get that option as we turned well before transition.  Darn.

I took a quick look at my split as I headed back out just to see where I was time-wise and saw I averaged around 18mph, which to me was shocking given the conditions.  I figured it would be like 16mph with my cautious first half of the loop and really not feeling like I was pushing it too hard.  Well, then it was on!  I kicked it up a notch on the bike and really started to push it.  I was able to take the windy hilly roads more aggressively on the way out of the resort, and then… the headwind hit.  Bummer.  I was still pushing pretty hard but not flying as much as I had hoped.  Regardless, I was still passing people and after a short out and back I saw one other female and wondered if I might actually be in second place.  That motivated me to keep pushing, even in the frustrating headwind, and soon I was turning to head back to transition.  When I dismounted I was shocked I biked under 3 hours!  I had expected to come in much slower due to hills and the rain.  Go me!

I quickly swapped shoes, grabbed my race belt, hat and baggie of nutrition and was off!  But something seemed wrong… oh man, I had left my aero top on!  I had to run all the way back to my transition spot, take it off and head back out, not a ton of time lost, but it was still extra time.  At this point I was now sort of racing since I was actually near the front of the ladies, so this irritated me a little.

Then I was off!  Although .5 miles in I spotted a porta potty and took advantage since I had to pee so badly and didn’t have any luck on the bike.  That cost time too, but it was worth it in my opinion, I wasn’t in the mood to run in mushy pee shoes.  The first couple of miles were uphill, and I really I wasn’t feeling a lot of pep in my step so after seeing my pace I decided I would be happy with a 10 minute pace (at that point 10’s felt hard).  I hoped that would be enough to not lose too much ground, but I was just going to see how I felt as I knew there were plenty more hills to come.  The hills didn’t disappoint, in fact I was having mini flashbacks of St. George 70.3, except this was a nice trail and shaded, so not as terrible/tough.  I just tried to focus on each mile and not get too overwhelmed and remember all of that dang incline running I’ve been doing on the treadmill.  I was ready for this!  I was also thankful that the course was super shady so at least it wasn’t hot.

When I reached the turn around at mile 3 (the run course was two loops) I saw the lead lady and realized I was in fact #2!  Woo-hoo!  When I headed back out about 4 minutes later I saw third and fourth place and they were looking strong.  That inspired me to haul ass up the big ass hill to keep my place.  I was shocked at a 9:15 split for that mile.  The rest of the run was kind of a blur, many spots where I ran solo, and I even dropped my salt and ran back to get it (my stomach was feeling off and there wasn’t soda/cola on the course was the website said, so I needed that salt) and there was some walking at aid stations.  On the second loop at the out and back I saw first place again and we cheered each other on.  Then about five minutes later I saw 3rd and 4th, but did not get a peep from them, they looked focused, and I was happy I had gained some ground on them.  Phew.  Since it was mile 10 I knew if I just kept with my pace, I could hold on to second.  Soon I was a mile out and I was thrilled.  This day turned out very differently than I expected!  I was so happy with my bike split and also happy that I was surviving the run, it wasn’t a death march, even though I was tired and the usual things hurt, I FELT GOOD.  It was so exciting running up the last tiny hill to the finisher chute, and when I crossed the finish line and heard the announcer say I was second female.  So cool!  It was a reallllly small race, but, still cool! First place waited for me at the finish and we congratulated each other, what a classy lady. 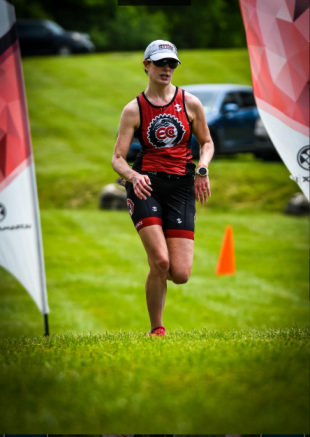 I will say I was sore as heck after.  Even my abs.  I don’t recall using them, but maybe all of the hills gave them a good workout because they were sore!  Gathering my stuff from transition was tough and the drive home (only an hour) was tough too, but I was going on some serious adrenaline from my successful race.   Oh and sidenote, I lost to first place by 3 minutes. THREE MINUTES.  The shoes in the bag with the bow, the aero top mishap (I’m still standing by my porta potty stop though, it was needed) walking through some aid stations…maybe if I had put a little more pep in my step during the first run… maybe… but it’s how my day went and honestly, things went really well.  So I’m moving on from those three minutes, but remembering during the next race that every minute really does add up!

This week is a recovery week and then next week it’s back to putting my head down and getting back to work! 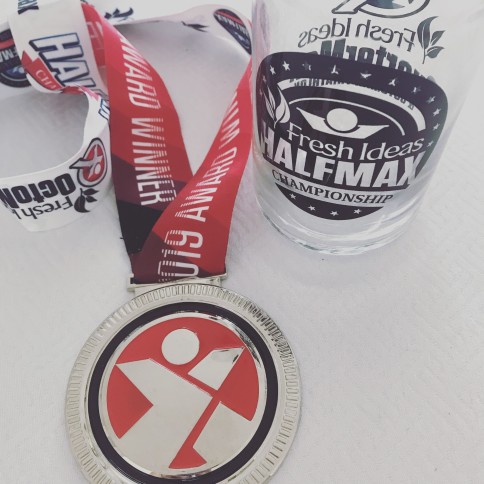