This was a busy race weekend, especially because the race was almost 6 hours away.  JMR and I left Friday early afternoon and headed up to Kenosha, WI, where were were staying for the weekend, as hotels in Racine were booked before I registered for the race. 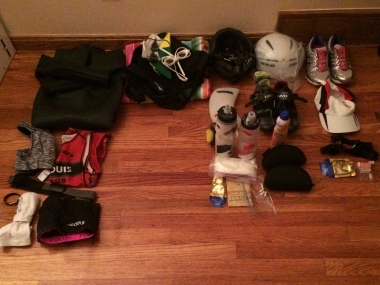 Ready to go! Just need to pack up all of this stuff first…

The drive up was pretty uneventful, and we got in around 7p.  After dragging all of my gear and our bags inside, we headed to a nearby Chili’s to grab a quick dinner.  When we got back to the hotel we watched random shows on tv and I think I fell asleep around 10p. 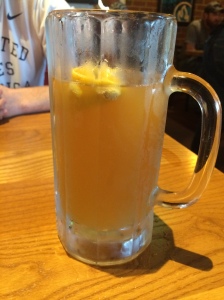 Saturday am was busy!  We ate breakfast we headed out around 9a to the race site for packet pickup and the athlete briefing.  Packet pickup was a breeze, I was good and didn’t spend too much at the IM store, I only walked out with a race shirt with all of the athlete’s names on the back of it. 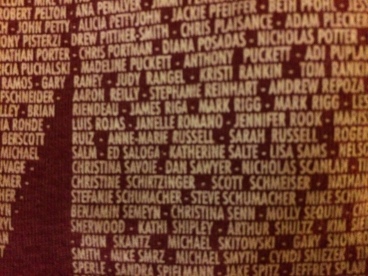 Racing as a Russell.

After the race briefing JMR and I headed to the race start, about a mile away, so I could do a practice swim to get used to the cold water and also do my pre-race brick.  The water was cold!! I think it took several attemps for me to put my face in the water and actually take strokes with my head down.  Eventually I got the hang of it, but the water was pretty choppy so after around 10 minutes I started heading back to the shore. 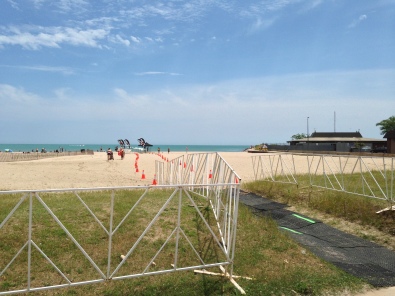 JMR snapped this photo while I was swimming, the beach was so pretty, this picture doesn’t really do it justice.

Next I hopped on my bike for a quick 30 min spin to just check out the gears and boy am I glad I did.  I didn’t realize it at first but my left cleat wasn’t able to clip into my pedal.  After several attempts I finally stopped to investigate.  My left cleat had mud stuck in the side of it, so after using a twig I got most of it out, and planned to do a better job when we got back to the hotel.  That did the trick and I finished up my ride followed by a short 15 minute run.

Finally I was ready to check in Lola and head back to the hotel. 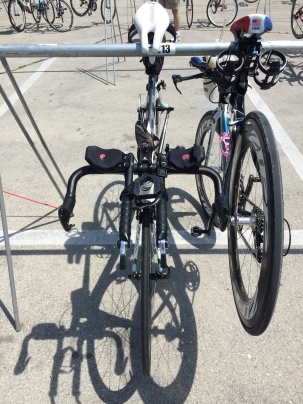 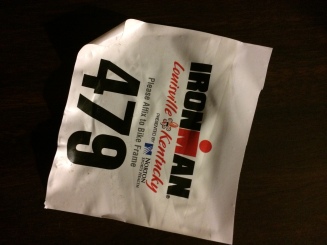 *Sniff* I had to finally take my IMLOU sticker off of Lola.

I took a short nap while JMR did his long run-10 miles- around the hotel.  Since there weren’t very many places/sidewalks to run, he just did a ton of loops, I was impressed 🙂

For dinner I had my usual steak and sweet potato at Texas Roadhouse a few miles from the hotel, and was asleep by 10p.  Well, for an hour to two, then I was tossing and turning until my alarm went off at 4a, so early!

I got up and ate my breakfast (two eggs and a banana) and started getting my gear together as well as my other stuff since we weren’t checking out from the hotel as well. We managed to leave the hotel around 4:50 and made it to the race site at 5:20, plenty of time since transition didn’t close until 6:30.  We parked at a nearby lot, grabbed my gear and headed to transition.  Setting up my transition spot was pretty uneventful, I know the drill: air tires, set out gear on transition towel (running shoes, nutrition (2 gels and salt tabs), hat, race belt, bike shoes with socks rolled up in each shoe). put nutrition on bike (honeystinger, 1 3 hr bottle of infinite and salt tabs), filled up my aero bottle with water….aannd done.

I left transition and found JMR so he could help me put sunscreen on my back.  I definitely had some goals for this race, but another goal, not time-wise, was to not get sunburned!  I already had planned to wear my arm coolers under my wetsuit so I wouldn’t have to struggle to put them on in transition, but I also wanted to make sure I didn’t miss any spots on my back with sunscreen.  Oh, and I also put a bottle of spray on sunscreen on my transition towel as well.  Between all of those things, I thought for sure I would avoid getting burned!

Soon it was close to 6:30 so we headed down to the beach where I as usual struggled to get that darn wetsuit as usual and then headed to do a quick warm-up to get used to the cold water.  Yep! It was still cold, actually colder than yesterday 60.5 degrees!  After flopping around in the water for a while I headed back to the shore to line up with my swim wave. 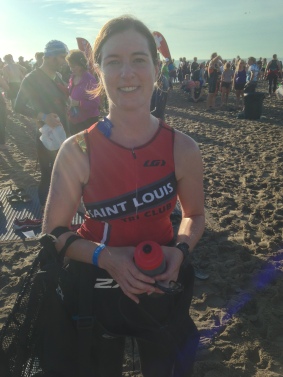 Time really flew and before I knew it, it was time for my wave to enter the water.  T-3 minutes and we would be off.  I nervously chatted with some other girls in my wave and then we were off! 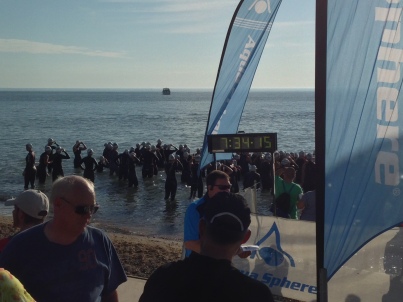 My wave…I’m in there somewhere!